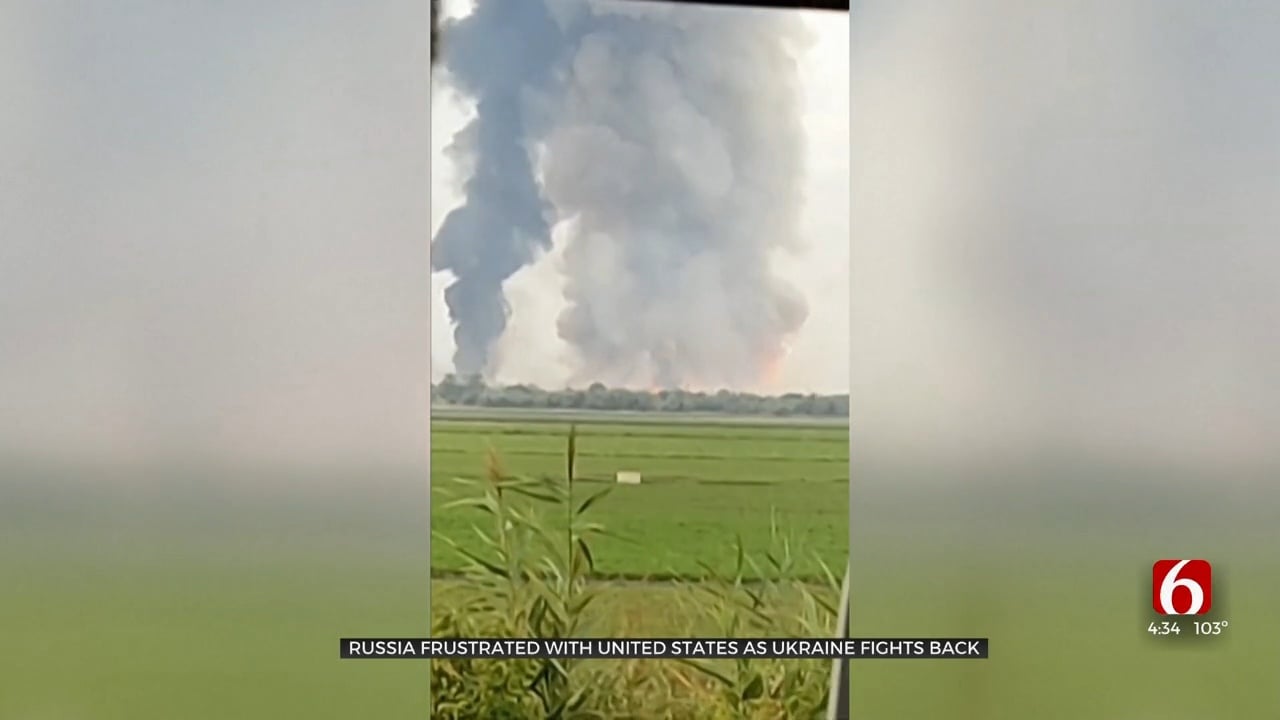 Russia Frustrated With United States As Ukraine Fights Back

Explosions and fires ripped through an ammunition depot in Russia-annexed Crimea on Tuesday in the second suspected Ukrainian attack on the peninsula in just over a week, forcing the evacuation of more than 3,000 people.

Russia blamed the blasts in the village of Mayskoye on an "act of sabotage," without naming the perpetrators.

Separately, the Russian business newspaper Kommersant quoted residents as saying plumes of black smoke also rose over an air base in Crimea's Gvardeyskoye.

Ukraine stopped short of publicly claiming responsibility for any of the blasts, including those that destroyed nine Russian planes at another Crimean air base last week. Russia seized Crimea from Ukraine in 2014 and has used it to launch attacks against the country in the war that began nearly six months ago.

If Ukrainian forces were behind the explosions in Crimea, that would represent a significant escalation in the war. Such attacks could also indicate that Ukrainian operatives are able to penetrate deeply into Russian-occupied territory, supplementing attempts to weaken Moscow's forces on the front lines. Image Provided By: CBS Newsn has demanded that Kyiv recognize Crimea as part of Russia as a condition for ending the fighting, while Ukraine has vowed to drive Moscow's forces from the peninsula on the Black Sea.

Videos posted on social media showed thick columns of smoke rising over raging flames in Mayskoye, and a series of explosions could be heard. The Russian Defense Ministry said the fires damaged a power plant, power lines, railroad tracks and apartment buildings.

"We came out to take a look and saw clouds of smoke coming from the cowshed where the military warehouses are," said resident Maksim Moldovskiy. "We stayed there until about 7-8 a.m. Everything was exploding — flashes, fragments, debris falling on us. Then the emergency guys came and said they were evacuating everybody."

"The detonations are rather strong. Ammunition is strewn all over the ground," he said, adding that several homes burned down.

Crimea is a popular summer destination for Russian tourists, and last week's explosions at Crimea's Saki air base sent sunbathers on beaches fleeing as flames and pillars of smoke rose over the horizon.

Ukrainian officials warned Tuesday that Crimea would not be spared the ravages of war.

Rather than a travel destination, "Crimea occupied by Russians is about warehouse explosions and a high risk of death for invaders and thieves," Ukrainian presidential adviser Mykhailo Podolyak said on Twitter. Russia blamed last week's explosions on an accidental detonation of munitions, but satellite photos and other evidence — including the dispersed blast sites — pointed to a Ukrainian attack, perhaps with anti-ship missiles, military analysts said.

Britain's Defense Ministry said in an intelligence update that vessels in Russia's Black Sea Fleet are in an "extremely defensive posture" in the waters off Crimea, with ships barely venturing out of sight of the coastline. Russia's flagship Moskva went down in the Black Sea in April, and last month Ukrainian forces retook strategic Snake Island.

"Western intelligence agencies not only have provided target coordinates for launching strikes, but Western specialists also have overseen the input of those data into weapons systems," Shoigu said.

Meanwhile, in the Donbas, the industrial expanse in the east that has been the focus of the fighting in recent months, one civilian was killed in Russian shelling, and two others were wounded, according to the Ukrainian regional governor, Pavlo Kyrylenko.

In Kharkiv in northeastern Ukraine, one civilian was killed and nine others were wounded by Russian shelling, regional Gov. Oleh Syniehubov said. He said the overnight attack was "one of the most massive shellings of Kharkiv in recent days."

One good piece of news emerged from the region: A United Nations-chartered ship loaded with Ukrainian grain set out for the hunger-stricken Horn of Africa in the first such relief delivery of the war. The shipment was made possible by an internationally brokered deal to free up grain trapped in Ukrainian ports by the fighting.