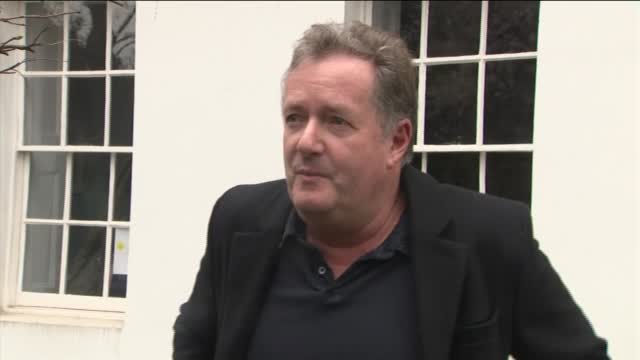 British television personality Piers Morgan is leaving "Good Morning Britain" following comments he made about Prince Harry and Meghan, the Duchess of Sussex, ITV announced Tuesday. Morgan has been a constant critic of the couple, drawing backlash from viewers and an investigation by a media watchdog.

"Following discussions with ITV, Piers Morgan has decided now is the time to leave Good Morning Britain," the broadcaster said in a statement. "ITV has accepted this decision and has nothing further to add."

Prince Harry and Meghan shocked millions Sunday in an interview with Oprah, revealing that relentless pressure from British tabloids and the royal family led Meghan to contemplate suicide. She also said there were discussions about "how dark" their baby's skin color would be. The royal family called the allegations "concerning," but said the issues would be addressed by the family privately.

Morgan, however, appeared on "Good Morning Britain" on Monday, calling Meghan's comments lies. "I'm sorry, I don't believe a word she says," he said. "I wouldn't believe her if she read me a weather report."

Both viewers and Morgan's own co-hosts condemned his actions. While Morgan clarified his comments the next morning, saying he believes suicide and mental health are important issues to be treated by professionals, he later stormed out of the studio after fellow presenter Alex Beresford called his treatment of Meghan "diabolical."

Morgan then walked off the show's set.

Later Tuesday, Morgan tweeted about his departure from the show. "Thinking of my late, great manager John Ferriter tonight," he wrote. "He'd have told me to do exactly the same thing. @GMB #TrustYourGut"

Earlier, Britain's Office of Communications said it would be investigating Morgan's comments under its "harm and offense rules" after it received more than 40,000 complaints.