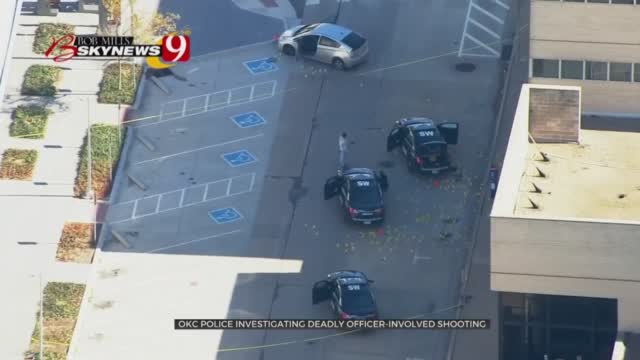 An investigation into a deadly shootout between Oklahoma City police and an armed suspect continued into Wednesday evening, more than 12 hours after it happened.

Police have not updated details of the shooting since early Wednesday morning.

"The pursuit went throughout the city on the south side and came downtown and ended at Couch Drive and Lee where the driver of the vehicle being pursued exchanged gunfire with officers," Captain Dan Stewart said.

An officer was shot in the chest. He was wearing a bulletproof vest, which police said saved his life. He was taken to OU Medical Center with non-life threatening injuries but has since been released.

"I don't know who shot first, we just don't have the information, but the result of the gunfire was the suspect is deceased, is dead," Stewart said.

A silver Prius involved in the pursuit matches the description of a car involved in an Amber Alert and homicide investigation Tuesday -- but has different license plates.

However, police told News 9, the Amber Alert suspect is "no longer a concern."

The 14-month-old child in the Amber Alert is safely in the custody of the Love County sheriff.

Oklahoma City Mayor David Holt tweeted about the barrage of gunfire Wednesday morning saying "that officer literally took a bullet for our city. Our prayers and gratitude are with him and his family today."