Girl’s Letter To Mail Carrier Gets Hundreds Of Responses 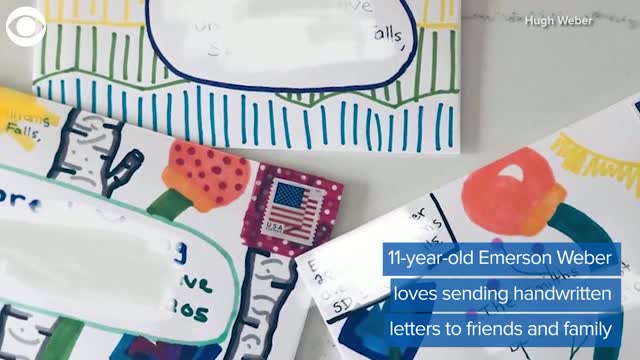 Girl's Letter To Mail Carrier Gets Hundreds Of Responses

During the pandemic, mail carriers continue to deliver millions of letters and packages each day. A young South Dakota girl wanted to show her appreciation, so she wrote a letter to her postman. She wasn’t expecting what she got in return.

The fifth-grader keeps up with at least a dozen family members and friends by mail, and decided to thank her Sioux Falls mail carrier Doug Scott with a letter. "I really wanted to thank him because he’s the one who right now is working and delivering our letters," Emerson says.

The next day, Scott and his supervisor wrote back with their appreciation and shared her note in an employee newsletter. Soon after, Scott showed up with two boxes of letters and packages from other mail carriers and the responses keep coming. According to the United States Postal Service, hundreds of employees have written to Emerson. Because there are so many letters, her father, Hugh, says the USPS is helping process them before they’re delivered. One letter that especially stood out was from a mail carrier asking Emerson to write to their son in Kuwait.

"A lot of them were a lot more personal and told me about their pets and their families," Emerson says.

She quickly got to work responding while her dad shared the tale on Twitter, where it's gone viral. "Much like Emerson, it's reach and impact was much, much broader," he says.

Millions have now seen his posts, with the U.S. Postal Service telling CBS News: “To have people notice the hard work that United States postal employees are doing on a daily basis has been an amazing encouragement. But somehow, the words of an innocent 11-year-old child [have] touched all of us."

Emerson and her family hope this inspires others. "We really don’t want it to be ‘she’ wrote a letter. We want it to be, we want people to write letters and just thank someone," she says.

Girl’s Letter To Mail Carrier Gets Hundreds Of Responses