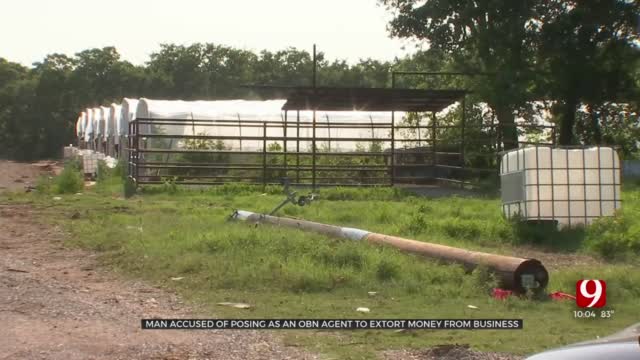 A man posing as a state narcotics agent is now behind bars.

The electric company where Brumley was an apprentice was hired to do some work at the grow site.

Unbeknownst to his employer, investigators said Brumley threatened to shut it down.

According to investigators, after surveying the needed electrical work at this newly established grow site Brumley doubled back days later and confronted the only English-speaking employee.

“Tells them he was the one that came out today, earlier today and that he was an apprentice lineman and part-time OBN agent,” said Stephens County Sheriff Wayne McKinney.

The former oilman, self-proclaimed cowboy and aspiring electrician claimed to be an agent with OBN, and flashed credentials, according to the report.

“He was supposedly wearing a weapon, a gun, looked like an OBN agent. He had some business cards,” said McKinney.

Records show Brumley, told the woman “she was illegal with the state of Oklahoma.” He told the victim if she paid him $4,500 he could “make the operation legal and keep the state off the property.”

When the victim returned, she found Brumley waiting with two other men and "was frightened for her life."

He's since been arrested.

“It's in her front yard, she’s pregnant, he's armed with a gun saying he can get her in compliance so she can make a living,” said McKinney.

The victim did not want to speak on camera but told News 9 Brumley acted as if he had done this before.