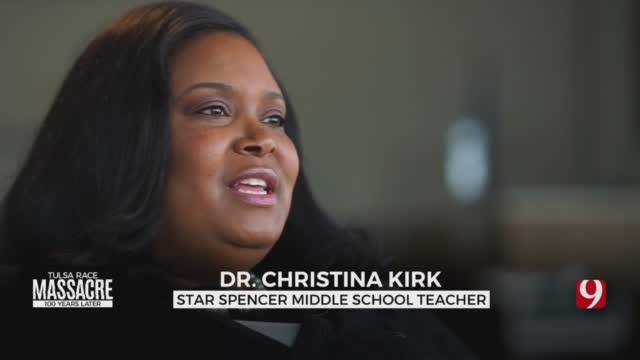 A bright light is now shining on a dark part of Oklahoma History. And that is especially true for school children who are now required to learn about the massacre.

The 1921 Commission along with the Oklahoma History Center has developed an in-depth curriculum that is now being used in a number of Oklahoma schools.

The 1921 bombing and burning of the prosperous Greenwood community that led to the deaths of as many as 300 Black Tulsans left a horrific scar in our state that for decades was never mentioned in our history books or taught in Oklahoma classrooms.

“This is something our kids need to know,” explained Dr. Christina Kirk, a teacher at Star Spencer Middle School in Oklahoma City. “They definitely need to know it and they need to know more than as a mark on a timeline. There’s a whole story there. There are lives, there are people.”

Kirk started teaching about the massacre shortly after she became a teacher back in 2017.

“Most of them don’t believe it until you see the pictures. The idea that something so horrific could happen in our own state does not easily resonate with them until you’re showing the pictures and you’re reading the survivor stories,” said Kirk.

The race massacre was part of the state's academic standards since the early 2000's. But the 1921 commission curriculum now offers educators guidelines and resources to go more in depth with lesson plans and links to photographs, videos, oral history interviews and historical documents.

“I think as we’re exposed to the real history, good and bad, of the state of Oklahoma in this way we begin to understand why people think the way they do, why they believe the way they do, because it does make up our identity,” said OKCPS Superintendent Dr. Sean McDaniel. “I think that’s important. If we just erase pieces because we don’t like them or we don’t want to face it or we don’t want to admit to it, it cheats all of us. Because then we are robbed of the true identity of our state.”

The biggest lesson however goes beyond dates and numbers of those killed, arrested and left homeless.

“The impact is hugely felt in this state, even still today. And especially among African Americans so for me, yes, I take it extremely personal,” said Brown. “Not only that we teach it but demonstrate its impact and emphasize its impact on our state today.”

Those lessons became personal for Kirk and her class when one of her students came forward saying their family was a part of the massacre.

“It gave him a sense of pride,” said Kirk. “He couldn’t wait to share that information with his classmates. We were able to research his family members on the list of those who perished and find his great uncle. It was special for the class.”

Pre-pandemic, Kirk even took her students on a field trip to Tulsa and the Greenwood area. A powerful first-hand perspective of what hate can do.

“Our students have to learn to discern information and that words truly matter and that some really bad things can happen from misinformation and just sharing an inaccurate perspective about people or a group of people,” said Brown. “I think that’s an extremely important 2021 lesson.”

The curriculum is online for anyone see and use.