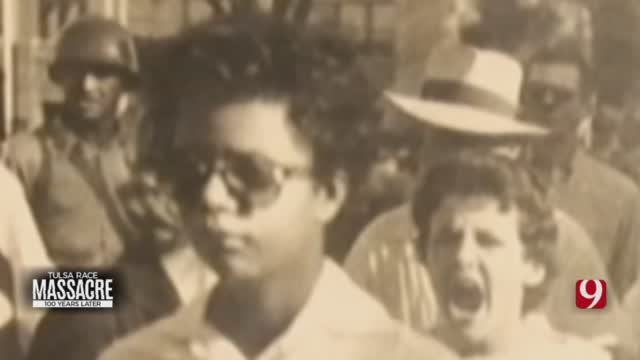 Storytelling is a powerful form of communication that keeps history alive from generation to generation.

"That is Elizabeth and this here is Hazel. Hazel was saying 'N***** go home,"' said Annie Abrams while pointing to a photograph from Little Rock's Central High School in 1957. "This was a day of hate."

Abrams is an 89-year-old lifelong civil rights activist and historian from Arkansas.

"If you don't know your history, you won't be able to change your history in the future and you will repeat it. I don't want people to repeat 1957," said Abrams.

Her house, a museum open to the public, sits just a few blocks away from Little Rock Central High School, which became a symbol of resistance to desegregation in 1957.

"That was when Arkansas was at its ugliest, other than the Civil War," Abrams stated.

Cameras were rolling, and the scene played out on TVs across the United States when nine Black students tried to get to class through mobs of angry white protestors. Tensions were so high, President Eisenhower called in the Army's 101st Airborne Division to escort those students to school for the rest of the year.

"The first-time federal troops were sent to the south since the Civil War was on the steps of Little Rock Central High School," Dean Skip Rutherford said. "That is a monumental part of history."

Rutherford is the Dean of the University of Arkansas Clinton School of Public Service. He said after 1957 businesses in Little Rock tanked and the city experienced "white flight" where white people left town.

"People quit moving here; people moved to the suburbs. People went to private schools. It had a ripple effect all over. It had a total ripple effect," said Rutherford.

It would take years, Rutherford said, for the city to turn around. And it would also take years for Little Rock to talk about what happened at Central High School.

"I think a city needs to come to grips with its past history," Rutherford said.

Rutherford helped plan the 40th commemoration in 1997 when the Little Rock joined together again, even with some of their white classmates. The message that day was very different.

Annie Abrams has a photograph framed in her house showing Elizabeth and Hazel standing together side-by-side and smiling on the 40th commemoration.

"This was a day of love," said Abrams pointing to that photo.

It was day of reconciliation, she said, that helped show the state it was time to embrace its past rather than hide it.

Central High is still a functioning school, but's also a national landmark and part of the National Park Service. The school has opened it's doors to tours and that brings in thousands of people from all over the country who want to learn this history.

"It's preserved forever," said Rutherford. "Younger people, all walks of life can come here and learn about the courageous action of young people and some adults who changed the course of American history. We ought to be proud of that. We ought not to celebrate what happened, we ought to commemorate it and we ought to understand it and we ought to learn from it."

And while progress has been made Rutherford said one thing is the same, "What has not changed since 1957 is that race is still the defining issue of our time."

Both he and Abrams say there's still work to do and still hope, that through every story, we can learn from our past for a better future.

"There will be no peace unless we all begin to have a respect for one another," said Abrams. We've got to teach the whole history, the good and the bad. Our best contribution to humanity and our worst. The purpose of sharing that history is that we don't repeat it."

History runs deep southwest of Arkansas in Birmingham, Alabama as well, where a movement for Civil Rights changed the United States in the 1960s. At the time Birmingham was one of the most racially conflicted cities in the country.

"Police brutality, particularly under [Police Commissioner] Bull Connor, was the order of the day. Blacks were routinely arrested and brutalized and then jailed. And then charged with resisting arrest and disorderly conduct. Whatever other charge police officers wished to lodge against them," said retired Judge U.W. Clemon. "To be discriminated against because of the color of your skin is humiliating to the point that it makes you mad and it makes you determined to do something about it. And it's incentive to prove that your worth is just as great as theirs."

Clemon has proved his value time and time again. He was Alabama's first black state senator and first black federal judge. But one of his greatest achievements came in 1963. He was a 19-year-old student at Miles College, with a dream of becoming a civil rights attorney, when he joined the foot soldiers marching for equal rights alongside Dr. Martin Luther King, Jr.: something that could have cost him his future.

"I knew if I got arrested and had a record, I would have problems being admitted to the bar, but that was a risk I had to take because I thought that the movement was so important and so vital that I had to be a part of it," said Clemon.

One of Clemon's demonstrations for desegregation is frozen in time with a picture he didn't know existed until the 1990s. It shows him on his 20th birthday, sitting with several other black students in the all-white public library.

"The policemen were taking pictures of us while we were in the library," Clemon said.

He said the only reason his group wasn't arrested that day is because officers thought the group's black chaperone was white.

"The adult chaperone for my group was Deenie Drew, who looked just as white as you are," Clemon told Oklahoma's Own Tess Maune.

He also joined a demonstration to desegregate a department store.

"I was assigned to go to Pizits Department Store, which was the largest department store in Alabama, to drink from the white water fountain and as I leaned over to take a drink of white water, they called them then a floor walker, but today it's security, a white security guard came up and put a pistol in my back and marched me out of the store," said Clemon.

Clemon was never arrested, but thousands of black demonstrators, adults and children, were arrested when they stood up to legalized segregation law enforcement's violent reaction to peaceful protests.

Kelly Ingram Park was ground zero for Birmingham's Civil Rights Campaign in 1963. Now, through powerful monuments, the park gives a chilling glimpse at the struggle and cruelty black demonstrators faced.

Police dogs were ordered to attack children crusaders and high powered fire hoses were turned on the children, in some cases, ripping the shirts off their backs. And eventually the bombing at the 16th Street Baptist Church would claim the lives of four little girls.

"There was an effort by the local press at that time to sweep it all under the rug and act as if it wasn't happening," Clemon said.

But with national television stations and newspapers, as an exhibit at the Birmingham Civil Rights Institute says, the world was watching.

"These images shook the world," said BCRI Education Program Consultant Barry McNealy while standing next to a photograph of firefighters hosing down black demonstrators.

McNealy said the images made their way to the White House, which led to the passage of the landmark Voting Rights Act and the Civil Rights Act.

The BCRI opened in 1992 and a has worked ever since to make sure the lessons of Birmingham's past and the civil rights movement help shape a better future.

"If you don't give that past its due, then you're missing a major part of that equation," McNealy said. "I think a part of what makes Birmingham special today is the acknowledgement of how deep and dark Birmingham was and how far it has come and that constant reflection makes it possible for us to open up our city."

"I think the most important lesson to learn is that where there is a problem, people of goodwill, when they come together and resolve that problem, they can do it. But it takes, first of all a recognition that there is a problem, and then a commitment to do something about it," Clemon said.

Judge Clemon said Birmingham's still not where it should be, but said it's far better than where it was.

"In a very real sense, it's a stark reminder of how far we have come. The very fact that you and I are sitting in this park without fear of arrest and brutality at the hand of Birmingham Police Department is revolutionary within itself," said Clemon. "I think there is hope, and sooner or later we'll get there."

Progress takes time, but there's promise that with persistence it can prevail.

"I was very encouraged by the outpouring of support and involvement of white Americans in the Black Lives movement last year because I saw for the first time in my life, a commitment on the part of a substantial number of white Americans to the cause of equal justice for all Americans and I'm very heartened by that movement. We didn't see very much of it here in Alabama, but Alabama usually behind," Clemon said with a grin.