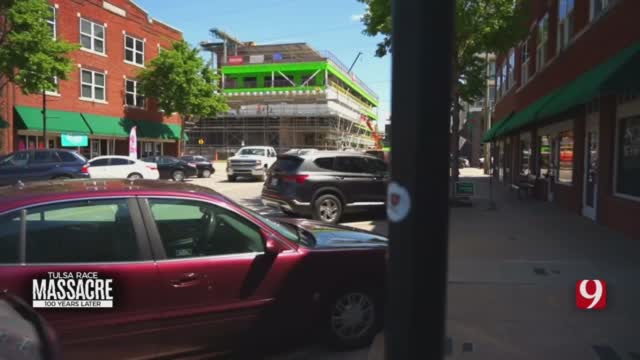 The Greenwood Rising History Center will tell the story of the Tulsa Race Massacre. The planning and constructing of the center has been a huge undertaking, but they've had the assistance of those who know something about telling the story of an Oklahoma tragedy.

In Tulsa's historic Greenwood District, the Greenwood Rising History Center is rising up almost from the ashes of what happened here 100 years ago.

“This is a story about the abominable human spirt. The spirt of resilience,” Project Director Phil Armstrong said. “The community that Greenwood was known for.”

The story of the Tulsa Race Massacre is one that until now was rarely told.

“I grew up 17 miles from that area and didn’t know the story until I was a college graduate. I mean that’s crazy. It’s wrong in so many ways,” Kari Watkins, the Executive Director of the Oklahoma City National Memorial said.

Unlike the attack on Greenwood, the bombing of the Murrah Federal building is a story that's well known. But the two events share many similarities.

“The fact that within this state we’ve had two incredibly life changing moments that started out with devastation and destruction, man’s inhumanity to man. But have the potential to bring people together for healing and for unity for reconciliation,” Armstrong reflected. “She (Watkins) definitely saw the similarities of the challenges but what could happen when you bring people together over this tragic history. That’s kind of where that relationship started.”

Watkins has worked with Armstrong and the folks with the Greenwood Rising History Center on both the physical and emotional aspects of the project.

‘Kari was one of those that said, ‘I like the way you are going with that. I would suggest you do this from our experience,’” Armstrong said. “Especially when we got to the very difficult material.”

“It’s not an art museum, It’s not the Western Heritage or Pop Culture. It’s a real-life story that brings a whole lot of bad things with it,” Watkins said.

Like the Oklahoma City National Memorial, Greenwood Rising will tell a horrible story. It will honor those who were killed and their decedents. But the hope is to also influence the future.

“We really do have a challenge to make sure we realize and communicate and have conversations about that this happened, and our country messed up and our state messed up,” Watkins said. “We owe it to their lives to remember them and to honor them and to make sure this never happens again.”

To further that conversation The Oklahoma City National Memorial hosted Armstrong and other members of the Black community in a recent panel discussion called - Better Conversations - Resilience and Reconciliation.

Armstrong said his hope is Greenwood will become a launching pad for racial harmony for the rest of the country.

“Ground zero for race relations in this country starts here in Greenwood, Oklahoma.”

Much like how all Oklahomans came together 26 years ago.

“We really have become the blueprint to understand how a city heals and puts themselves back together,” Watkins said.