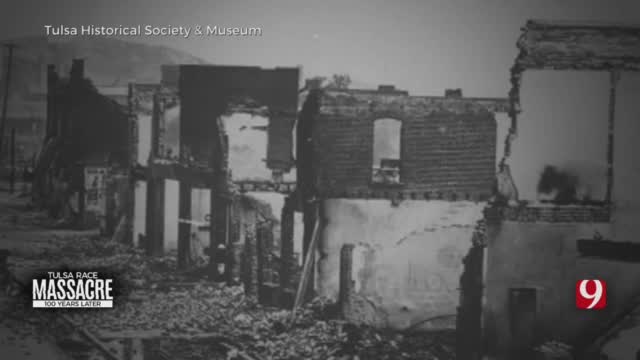 It has been called “America’s Most Beautiful City.” It has hosted the International Petroleum Expo, and for years was known as the “Oil Capitol of the World.”

But there is a part of Tulsa’s past that had been hidden; a secret many wanted to keep buried.

Randy Krehbiel is a writer with the Tulsa World, and he has been researching the 1921 Tulsa Race Massacre for more than two decades.

Krehbiel has been going through the archives and documents—tracing the history of what happened.

“This was basically a war,” Krehbiel said. “If you look at the pictures of Greenwood from the day after…It looks like pictures from World War II of cities that had been leveled by bombs. So, it was burnt to the ground.”

But this story remained hidden for years.

Oklahoma’s Own LeAnne Taylor remembers as a 6th grader in school that there was a unit on the history of Tulsa, complete with a timeline of significant dates. But there was a gap in 1921.

“Why wasn’t it talked about?” LeAnne asked.

“I’d say—overall—it is just a very traumatic event and, I think, people—white and Black—were afraid of it and it was difficult for them to deal with,” Krehbiel replied.

Then in 1971, on the 50th anniversary of the massacre, a local publication called Impact Magazine decided to shine a spotlight on that history.

“Why not do an issue dedicated to, and commemorate the fact, that this happened and get as much information as we can out to the people because it just wasn’t something that was talked about,” Dale Hogg said.

Dale Hogg was a lifelong Tulsan who broke barriers at Channel 6 as the city’s first Black Anchor.

He was working for Tulsa’s Urban League at the time of the anniversary, and even he was surprised to learn so much about what had happened.

“But in the dark,” Hogg replied.

In 1971, historian Ed Wheeler was asked by the Tulsa Chamber to write an in-depth article about the massacre. But once it was written, he said the Chamber chose not to print it; neither would the Tulsa World or the Tulsa Tribune.

It finally ended up at the Urban League, where the organization ran the piece in its magazine.

“The word got around that I was writing it. I had interviewed too many people and those guys, whoever they were, were afraid I was going to name names and that the very thing I was not going to do because I was only interested in what happened,” Wheeler said.

Krehbiel said even 50 years after the massacre happened, people were worried it would ruin them or their families’ reputation.

“Many of those people who were participants—and it is important that participants as separated from witnesses or victims, there are people who were actually in it—were 50 years older, and they were embarrassed and humiliated that they had participated and the did not want anybody to know that,” Wheeler said.

While the magazine had to be reprinted several times due to demand, 50 years later many people are still unaware of what happened in Tulsa in 1921.

It seems, to me, there has been a dependency for Black Americans to teach white Americans what happened in the past, Hogg said. “Well, that can’t be the onus upon Black Americans. [It] has to be that individuals take it upon themselves to say that ‘I want to know.”’

100 years after this tragedy, more people want to learn about this historic event and how it might change us in the future.

“How Tulsa deals with the centennial, and deals with some things going forward, will have an effect on how what happened 100 years ago is remembered,” Krehbiel said.