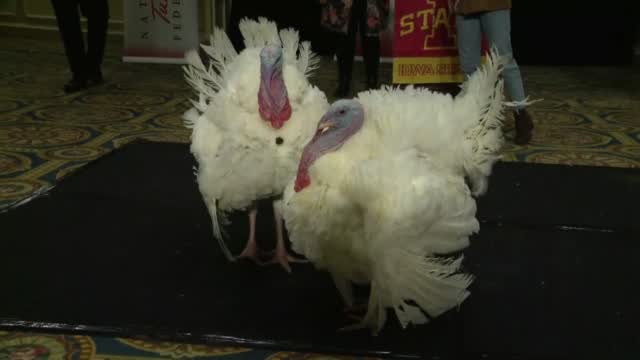 Voting is now underway for which lucky turkey will get the honor of being pardoned by President Donald Trump.

The two birds going "beak-to-beak" are named Corn and Cob, both raised on an Iowa farm.

They made their public debut on Monday at a press conference in Washington, D.C.

The winner of the online poll will be presented Tuesday before President Trump at the annual White House Turkey Pardon as the 2020 National Thanksgiving Turkey.

When they return to Iowa, the turkeys will head to Iowa State University to interact with students and take part in the animal sciences and veterinary departments.

The farmer who raised Corn and Cob had a message for everyone thinking of downsizing their Thanksgiving meals due to the pandemic: buy the biggest turkey so you'll have leftovers.

According to the White House, the National Thanksgiving Turkey Presentation dates back to 1947.