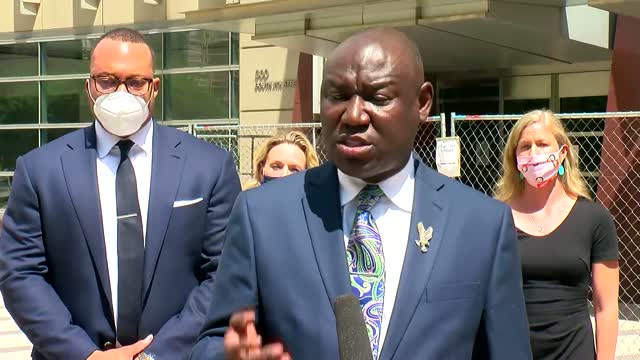 Attorneys for the family of George Floyd, a 46-year-old Black man who was killed in police custody, announced a lawsuit Wednesday against the city of Minneapolis and the four police officers charged in his death. Attorney Ben Crump and co-counsel Antonio Romanucci made the announcement about the civil lawsuit.

The lawsuit filed in U.S. District Court in Minnesota alleges that the four officers violated Floyd's rights when they restrained him and that the city allowed a culture of excessive force, racism and impunity to flourish in its police force.

"It was the knee of the entire Minneapolis police department on the neck of George Floyd that killed him," Crump said. He contended that "deliberate indifference," on behalf of the city and police department, led to Floyd's death.

According to the attorneys, the suit aims to prevent another death like Floyd's by making the fallout "financially prohibitive" for the Minneapolis, and set an example for other cities.

"This is an unprecedented case, with this lawsuit we seek to create a precedent," Crump said.

The suit also alleges "vague" use of force policies, which stipulate only that police use an amount of force equal to what is being used against them, allowing officers to decide what they can and cannot do, according to the attorneys.

"(Floyd) was compliant, he was restrained... the force turned into deadly force," Romanucci said.

Crump called Floyd's death "torture," and said that if the city's policies were clear to begin with, "we would not be here today."

"The tipping point has arrived," he said.