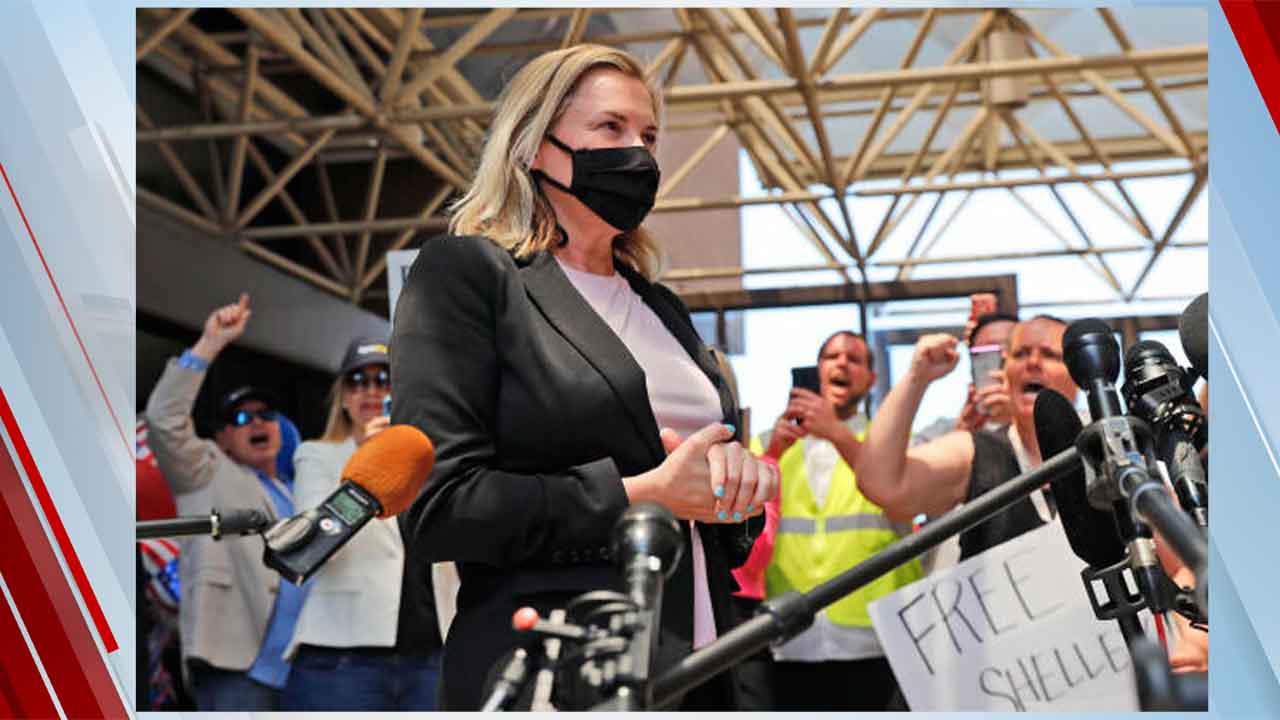 Shelley Luther, the Dallas salon owner who was arrested earlier this week for violating a stay-at-home order by reopening her business, was released from jail on Thursday. Texas Governor Greg Abbott modified his COVID-19 executive orders earlier in the day, effectively setting Luther free.

Luther was serving a seven-day jail sentence — but only served about two days — after she reopened her business nearly two weeks ago and publicly tore up a cease-and-desist letter ordering her to close. Abbott modified his orders on Thursday to eliminate confinement as a punishment for violating the order, specifically naming Luther in his announcement.

A crowd of people greeted Luther as she exited jail on Thursday afternoon. The group held signs and balloons, and chanted "Shelley's free." An emotional Luther thanked her supporters, but said she "was a little overwhelmed."

"I just want to thank all of you, who I just barely met and now you're all my friends," she said. "You mean so much to me, and this would have been nothing without you. Thank you so, so much."

Abbott said in a press release Thursday that his modifications are being applied retroactively to April 2. He said the modified order "supersedes local orders and if correctly applied should free Shelley Luther."

"Throwing Texans in jail who have had their businesses shut down through no fault of their own is nonsensical, and I will not allow it to happen," Abbott said in the release. "That is why I am modifying my executive orders to ensure confinement is not a punishment for violating an order."

Abbott said his modification "may also ensure" the release of Ana Isabel Castro-Garcia and Brenda Stephanie Mata, who were arrested in Laredo, Texas, for allegedly advertising and providing cosmetic services inside their homes.

"As some county judges advocate for releasing hardened criminals from jail to prevent the spread of COVID-19, it is absurd to have these business owners take their place," he said.

The announcement followed a statement from the governor on Wednesday in which he voiced agreement with Texas Attorney General Ken Paxton, who called for Luther's "immediate release." Paxton said he believed the judge that sentenced Luther was abusing his authority, and that her arrest seemed like a "political stunt."

Abbott joined the Attorney General "in disagreeing with the excessive action by the Dallas Judge." The governor said arresting Texans for non-compliance "should always be the last available option."

"Compliance with executive orders during this pandemic is important to ensure public safety; however, surely there are less restrictive means to achieving that goal than jailing a Texas mother," Abbott said.

Other officials have backed Luther. Texas Lt. Governor Dan Patrick said he would cover a fine owed she owed, and a spokesperson for Patrick later confirmed he followed through on his pledge, CBS DFW reported.

The case has highlighted the tensions between people wanting to return to work and officials warning about the dangers of COVID-19. Texas recorded more than 2,000 coronavirus cases over May 2 and May 3 – the most the state has seen in a two-day period since the coronavirus crisis started.

As of Thursday, the state had 15,852 active coronavirus cases. Dallas County had the second-highest number of cases with 4,623, according to the state's department of health. Over 1,700 people are currently in the hospital due to the disease, and 948 deaths have been reported.