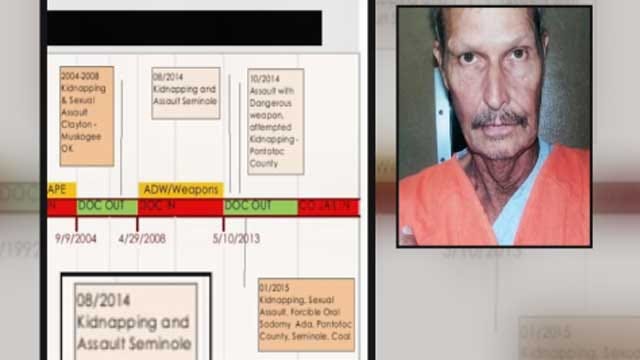 A man accused of preying on women across the state is now behind bars. So far, investigators believe he raped at least six women over a 30 year period, but there may be more victims.

Authorities are looking for anyone who may have been a victim or knows anything about this man's past to come forward. His crimes date back to the early 1980's, but the Pontotoc County District Attorney's office is working to find out what happened in some of those cases.

RJ Thompson Jr.'s first reported sexual assault case dates back to 1985, but the charge was dismissed. The next known sexual crime was 8 years later in 1993 for kidnapping and sexual assault, but Thompson was acquitted.

He escaped from the Department of Corrections and then in 2004 and in 2008 more kidnappings and sexual assaults were reported.

By this time, he got his routine down pat.

“He uses some form of a con to get them in the vehicle with him then prevents them from leaving by force,” Seminole County Deputy David Hanson said.

Six years pass before Thompson shows back up in the system for kidnapping and assault in Seminole County.

Two months later, he strikes again with assault with a dangerous weapon and attempted kidnapping.

The Pontotoc County DA filed charges after a woman came forward and said Thompson conned her into his car, raped her multiple times and forced her to perform sex acts. She got away by telling him her relatives saw her leave with him.

Detectives later found her pants on the side of a road and duct tape inside Thompson's trailer.

“As he slowed over here at the stop sign, the victim jumped out of the vehicle and took off running,” Hanson said.

Another rape victim came forward when Thompson's picture hit the local paper. She'd already reported the assault but couldn't identify Thompson until now, and authorities believe there are more victims.

“There are more cases where people were definitely victims for a long period of time but didn't necessarily report the crimes,” City of Ada spokesperson Lisa Bratcher said. “So, they're really wanting to find these people and question them.”

If you have any information contact the Pontotoc County Sheriff's Office or the Ada Police Department.