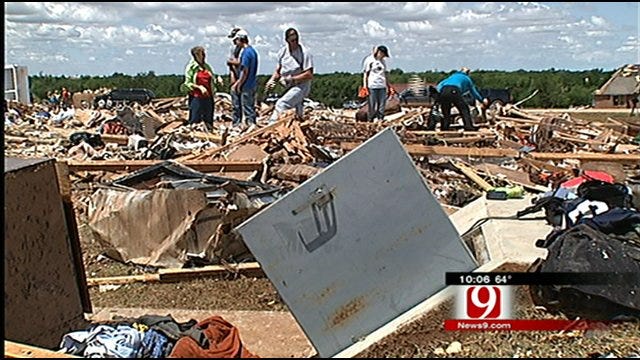 CASHION, Oklahoma -- As a tornado flattened one home after another along a street in Cashion, about a dozen people rode out the storm together in a shelter.

Kathy Gooch lost her home when the twister hit.

"It's hard to believe that this was even a house, it just looks like a pile of debris right now," and Gooch. "To show you really how strong this storm was, two cars were parked right here and the storm threw them back 100 yards. I never thought I'd live through something like this."

Gooch says she's counting her blessings, even though her home is torn to shreds.

"It was terrifying. When it actually hit, it sounded like a bomb going off."

Gooch and 10 other people rode out the storm in a shelter. Edmond police officer Chad Brown was among them. He says he got back into the shelter at just the right time.

"A friend of mine across the street, his pregnant wife was down with us," said Officer Brown. "He texted me and said hey I'm watching on TV. It's right over you, stay in the shelter. It was the first time I didn't second guess someone and two minutes later, it hit."

The storm destroyed homes and swept away possessions, but many of these neighbors are still smiling.

"It's all stuff that can be replaced. We're healthy, we're alive, and I thank God for that," Gooch said.