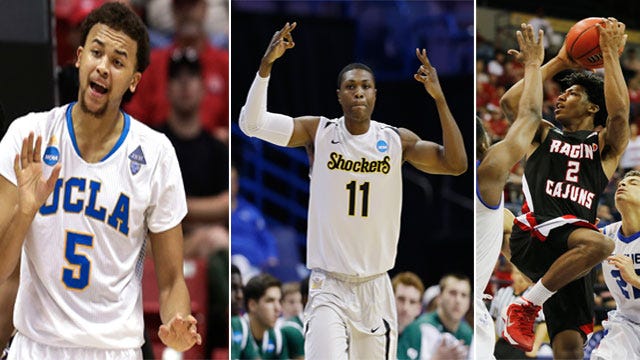 It's day No. 3 of the Thunder's NBA Draft countdown. To read about the countdown and about prospects 25-23, click the link below.

Anderson has freak length, 6-foot-9 with a 7-foot-3 wingspan, but that's not all he brings. Anderson averaged 15 points, 9 rebounds and 6.5 assists last season while shooting 48 percent from downtown. He's a well-rounded and complete offensive threat.

Like any NBA player, skill is only useful if you have the physical tools to compete. There are serious questions as to whether Anderson has those tools. He has the length, but he came in at 13.4 percent body fat and only weighs 230 lbs (not ideal for an NBA 3). It looks as if Anderson has never visited a weight room in his life. Anderson will need to start taking his fitness seriously if he wants to compete in the NBA.

He would add an offensive weapon to a team that could use one, especially on the wing. His 3-point shooting could help OKC space the floor better offensively. His defense would likely be a liability, but if he begins to bulk up and train seriously, he has the potential to be a very good player.

Like most prospects in this draft, Payton has the physical tools. You won't find many point guards at 6-foot-4 with a 6-foot-8 wingspan. Payton finishes well at the rim and can take over in transition. He's an active defender with the potential to be a lockdown guy.

At just 180 lbs, Payton needs to find Kyle Anderson and set up a weight room date. Adding weight will further both his defensive ability and his efficiency around the rim. Also, Payton needs a jumper. He shot just 26 percent from deep last season and 60 percent from the foul line. Those numbers will be exposed quickly in this league. Fortunately, if there's one thing that players have historically been able to learn quickly, it's shooting.

If OKC wants to shift Reggie Jackson into the starting five (or just play him a lot with Westbrook), Payton would provide a capable third point guard. Having played three years in college, his overall game is NBA ready, and the Thunder needs guys who can play now. Payton slips a little bit on this list due to the fact that OKC has other areas of need (SG, PF/C) that are slightly more pressing than a third point guard who can't shoot.

Early is a terrific athlete. He uses his versatile skill set to give defenders of all sizes fits. He can step out and knock down jumpers or attack the basket and finish. Early is one of those guys who just seems to always be in the right place at the right time.

No set position. At 6'7 with a 6'10 wingspan, he's a little undersized for an ideal power forward. Early will need to improve his 3-point shot and ball-handling ability in order to draw bigger defenders away from the basket.

OKC needs another serviceable big man, and there just aren't many available in this draft. Most of the top big man prospects are very young foreigners who still have big holes in their games. If Early is there at 29, the Thunder would be smart to pounce. His athleticism, skill and energy can only help this team going forward.