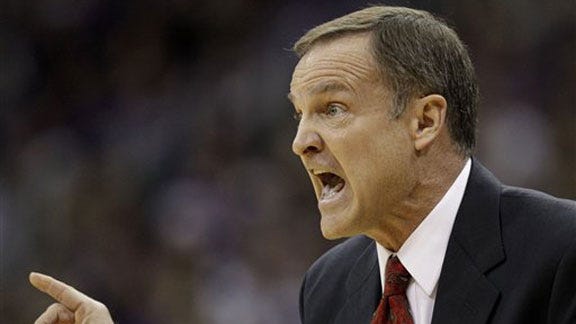 This may be a surprise for all you football fans out there, but college basketball season is nearing quickly, and the Oklahoma Sooners began practice earlier this week in preparation of the 2015-16 campaign. Here are a few storylines to keep an eye on heading into the season.

Best starting lineup in the nation?

The strength of this OU team will definitely be the experience in the starting lineup, with Jordan Woodard, Isaiah Cousins, Buddy Hield and Ryan Spangler all returning as two-year starters or more.

Hield was last season’s Big 12 player of the year after averaging 17.4 points per game to go with 5.5 rebounds, and was voted by the conference in the preseason to receive the honor again this year. Hield brings his “A” game to nearly every contest and his energy is contagious throughout the rest of the squad.

Both Woodard and Cousins will pair up to be a phenomenal tandem at the guard spots, and Woodard could emerge as more of a floor general this season. His assist totals dropped from 4.6 per game as a freshman to 3.8 as a sophomore, so I believe he’ll try to improve on that aspect of his game moving forward. OU ranked No. 182 in the nation in the assists per game category last season with 12.5 and it’ll need to drastically improve in that category.

Spangler, who averaged 9.7 points and 5.7 rebounds as a junior, will be a force on the inside yet again this season.  The addition of seven-foot transfer Akolda Manyang  will bring a tremendous shot blocking presence to the defensive post, and free up Spangler from guarding a bigger player on the defensive end of the floor.  There’s no guarantee that Manyang will be the final puzzle piece to the starting lineup, but his defensive dominance could be the key to getting the Sooners over the hump this season.

Check out the slideshow at the bottom of the story which features the returning OU starters.

What about the bench?

While the Sooners’ starting unit is the team’s strength, the bench was what undoubtedly held them back last year. The bench averaged a lowly 11.8 points per game, and anytime OU experienced any type of foul trouble they weren’t able to rely on help from the reserves.

This season OU will be able to turn to Dante Buford for some scoring help off the pine. The forward is eligible this season after sitting out last year, and was the No. 63 ranked recruit in the 2014 class according to ESPN.

Khadeem Lattin should also be improved this season in the post, and will be a spark off the bench if he isn’t inserted into the starting lineup. Also look for freshman guards Rashard Odomes and Christian James to be key contributors for the second unit.

Will the improvement continue?

Each and every year since Lon Kruger took over as head coach of the Sooners, his team has improved in the win column. In his first year OU won 15 games, the next year 20, the next 23 and last season Kruger’s crew totaled 24 wins.

Last season could’ve ended with even more W’s if it weren’t for a Michigan State comeback in the Sweet 16. This OU team knows they were capable of doing more last year, and they don’t lack confidence with a stout team returning. The Sooners also don’t lack hype around the program either, as many top media outlets consider the Sooners a top-ten team entering the year.

With other top-ten teams such as Kansas and Iowa State also in the Big 12, it’ll be interesting to see if this is the year that Kruger leads his team to a conference championship.