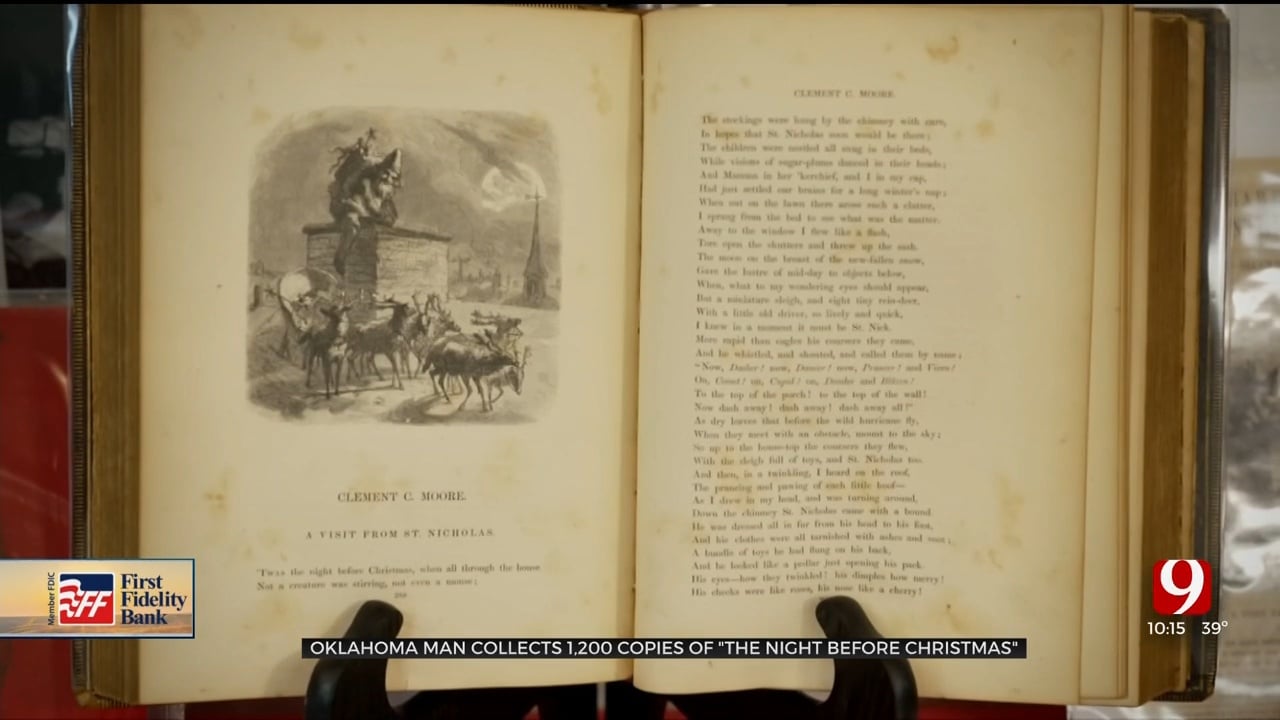 Oklahoma Man Collects Over 1,200 Copies Of 'The Night Before Christmas'

“Twas The Night Before Christmas” is without question one of the most popular Christmas stories of all time, and there may not be anyone with as much knowledge and history of the iconic poem as Curtis Smith.

Written by Clement Clark Moore, it was initially titled “A Visit from St. Nicolas”.

“In 1822 he wrote the poem, and he was reading it to his family on Christmas eve, just like the poem says,” Smith said.

His family was so impressed by the writing that they wanted a copy of the now famous poem.

“Well, the next year she sent her copy to the editor of the Troy Sentinel, in Troy New York, and he put it in the newspaper anonymously,” Smith said.

This year marks 200 years since the poem was written and a 30-year fascination for Curtis who now owns over 1,200 copies of the poem.

He isn’t totally sure of the exact number of copies; he knows exactly what he does have and where it is in his home.

“I have a memory, and when I see a book in an auction or I see a book somewhere, I can automatically tell you if I have it or not,” Smith said.

From newspaper publications to original books his collection is unmatched by colleges and museums, but Smith still scans the internet daily looking to add more. He received his latest while doing the interview.

“This is one that is not on the bibliography, and it is the poem. I haven’t seen it either, so we’re going to look at it at the same time. I should have gloves on,” Smith said

Last year his efforts paid off, when he found the gem of his collection.

“Down in Dallas, the heritage auctions had the very first “Twas the Night Before Christmas” book, Smith said.

The first time the poem appeared in a book was in the United States National Almanac in 1824. It’s in plastic and not typically handled because there are only three remaining copies.

“The other two I think are in colleges, and I have the other one,” Smith said.

A lot of the publications date back to the 1800s. The priceless items that are stored in a vault are very rarely taken out,

After 30 years of collecting, Curtis now has one desire for his work

“This collection probably needs a good home, rather than in my house, you know in safes here,” Smith said.

“You know, I’ve bought books in England and Australia, and you name it, and I’ve brought them all back to America, and so I have them,” Smith said.

He’s had offers in other states for a display, but he is an Oklahoman through and through and really wants a place in his home state for this priceless Christmas collection.

“I’ve collected stockings that were hung by the fireplace or the end of the bed. Original illustrations that went into these books from 1949. I’ve collected the very first “A Christmas Carol,” Smith said.

He’s not looking to sell the collection or make money for it; he simply wants to share his joy of Christmas with kids of all ages.

Truly living up to his calling.

“The guy that saved Christmas, not saved it but saved it,” Smith said.