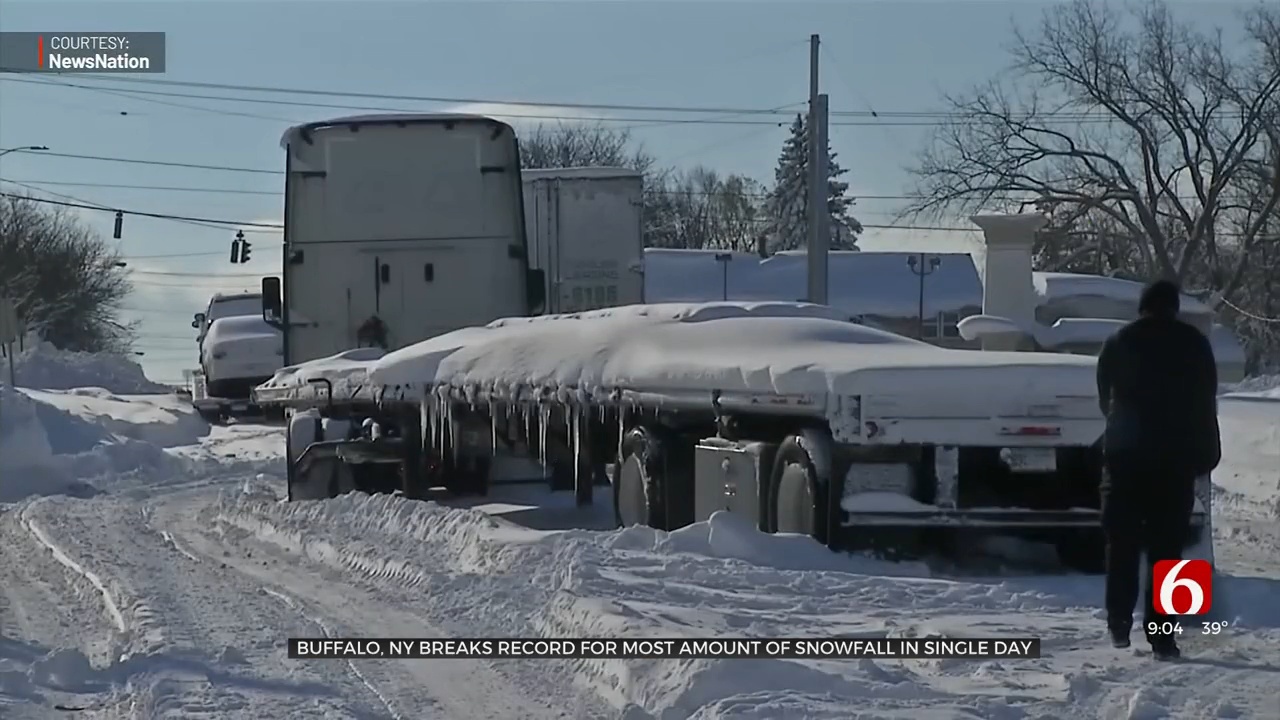 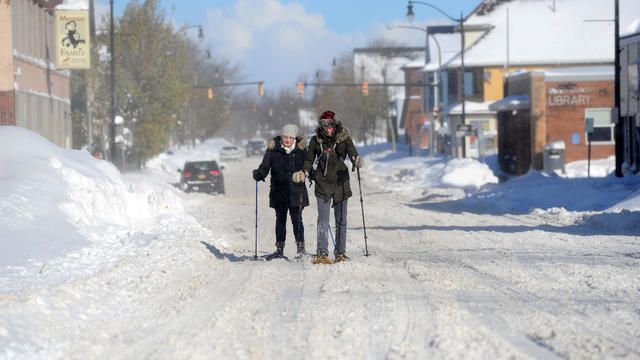 Parts of New York finally caught a break Sunday after a storm spent days dumping a potentially record-setting amount of snow on cities and towns east of Lake Erie and Lake Ontario.

Many businesses in the hardest-hit areas remained closed, but highways reopened and travel bans in many areas were lifted, though bands of lake-effect snow were expected to bring up to 2 feet (0.6 meters) by Monday morning in some parts of the state that were largely spared in earlier rounds.

"This has been an historic storm," New York Gov. Kathy Hochul said at a briefing on Sunday. "Without a doubt, it's one for the record books. And as someone who's from Buffalo and has lived in upstate my entire life, we've seen a lot of snow. But when you hit 80 to 85 inches over the course of, you know, just a couple-of-days snow event, everywhere from Natural Bridge up in the North Country to Orchard Park, that is one to tell your grandkids about."

As of Sunday afternoon, Hochul said there were about 1,200 power outages in the state, with about 300 in Jefferson County and about 100 in Erie County.

Snow began falling Thursday in towns south of Buffalo. By Saturday, the National Weather Service recorded 77 inches (196 cm) in Orchard Park, home to the NFL's Buffalo Bills, and 72 inches in Natural Bridge, a hamlet near Watertown off the eastern end of Lake Ontario.

Similar multiday storms have brought bigger snowfall totals than that in the past to New York, but the ferocity of the storm on Friday appeared to threaten the state's record for most snowfall in a 24-hour period: the 50 inches (127 centimeters) that fell on Camden, New York, on Feb. 1, 1966.

National Weather Service meteorologist Jason Alumbaugh, who is based in Buffalo, said it was too early to say whether any of this year's snowfalls exceeded that record.

According to WIVB, the 77 inches in Orchard Park was the highest total for all towns and villages in the state. Hamburg had 73.7 inches, while Blasdell had 65 inches, and the top five was rounded out by Elma's 58.2 inches and West Seneca's 49 inches.

Hochul is asking for a federal disaster declaration for the affected areas, which would potentially unlock some aid. She said teams were checking on residents of mobile home parks in areas that got enough snow to potentially crumple roofs.

The roof and walls of a bowling alley in Hamburg caved in under the pressure of lake-effect snow, WIVB reported. Hochul, who assessed the storm damage there on Saturday, noted the bowling alley's roof collapse in her briefing, warning others that "these roofs can be collapsed when you put the weight of five, six, seven feet of snow on them as well."

Due to the heavy snowfall, a Sunday football game between the Buffalo Bills' and Cleveland Browns was moved to Detroit.

New York is no stranger to dramatic lake-effect snow, which is caused by cool air picking up moisture from the warmer water, then releasing it in bands of windblown snow over land.

This month's storm is at least the worst in the state since November 2014, when some communities south of Buffalo were hit with 7 feet (2 meters) of snow over the course of three days, collapsing roofs and trapping drivers on a stretch of the New York State Thruway.