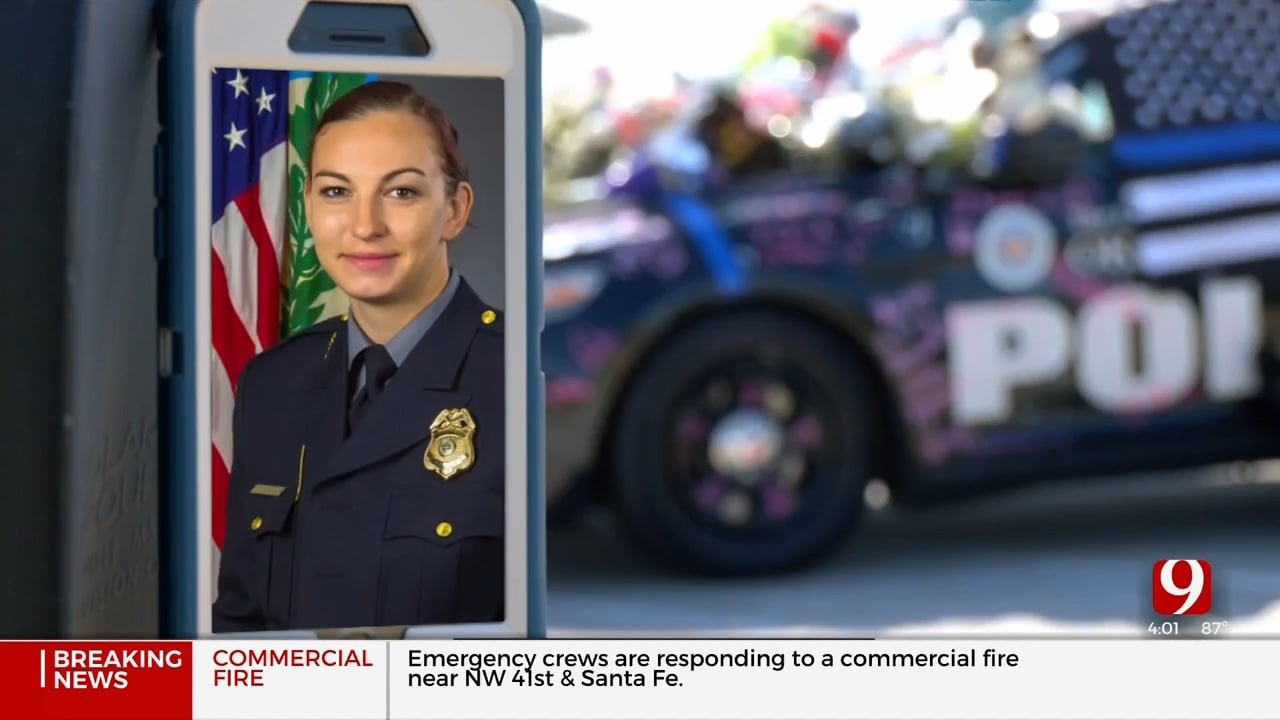 Law enforcement officers and community members filled an Oklahoma City church Thursday afternoon to honor an officer who was killed by another driver one week ago.

Dozens of law enforcement vehicles took part in a procession that ended at Southern Hills Baptist Church where a celebration of life service was held for Sgt. Meagan Burke.

In the early morning hours of Sept. 29, Burke was driving home from work on I-44 when another vehicle went over the center guardrail and hit Burke's vehicle head-on, police said. The 31-year-old died at the scene.

"It's the loss of a friend, a loved one, a true community servant," said one of Burke's friends, fellow officer Matt Bermel.

The driver of the other vehicle survived. Police said they are still investigating the crash.

Bermel said he met Burke in the police academy, from which Burke graduated in 2016. Burke became friends with both Bermel and his wife.

Bermel recalled when Burke went above and beyond during an arson investigation.

"After getting the suspect in custody, she then went door-to-door, making sure that everyone was out of the building as the building was on fire," said Bermel.

Bermel said Burke was also a mentor to kids through the youth leadership academy.

"She's done that for as long as I can remember," said Bermel. "She was involved in our police athletic league as well, and that's basically mentorship through athletics. She was a big soccer player. Played in college and so she used that to -- used athletics to connect with the kids."

In addition, Burke was known for her love for dogs.

"She rescued two just off the street while at work that she found,” Bermel said. “And if there was a dog that needed a home, she was either going to find one or provide it herself.”

To honor Burke, Bermel wore a unicorn pin on Thursday.

"She wouldn't want us crying or sulking. I think she'd want us laughing in her memory," said Bermel. "This is kind of one of those small gestures of kind of her humor and try to smile when all we really want to do is cry."

Parked outside the Oklahoma City Police Department's Santa Fe Division is a squad car adorned with tributes to Burke. The car is covered with messages of support, as well as flowers and stuffed dogs and unicorns.

Although Thursday was a somber time, Bermel had a message of hope for his friend.

"I know you're watching over us now," said Bermel. "This isn't a goodbye, but we'll see you later."

The Oklahoma City Fraternal Order of Police Foundation is collecting donations to benefit Burke's family. Click here to contribute to the fund.