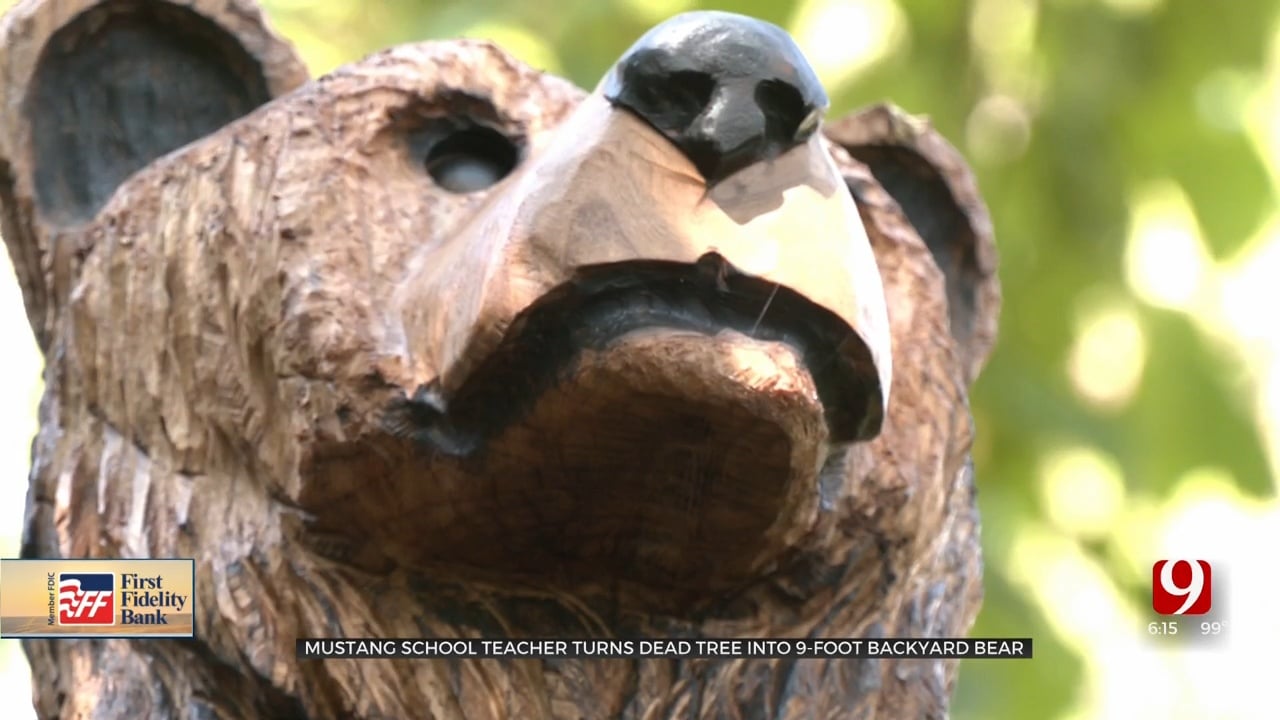 When Gary Gunter’s tree began threatening his neighbor’s house, he couldn’t bear to get rid of it.

The old Elm tree was about forty feet tall, but it was dead, and leaning right over the house.

“It had died because we had some armadillos get underneath and they just built the biggest dens you’d ever seen,” said the homeowner, Gary Gunter.

The tree would have to come down, but the first concern was the pest that killed it.

“Pest control people when they were out here, they ran camera’s down through the tunnels, and they came back and said this was the biggest den that they had ever seen,” said Gunter.

The solution was to set traps to catch the critters.

“The first two days we caught two of them, and then after that I think we caught seven possums and one of the neighbor’s cats,” said Gunter.

With the tree down and removed from his backyard, Mr. Gunter’s daughter told him about one of the art teachers at Mustang Middle School that carved bears from trees.

Scarborough started carving trees as a hobby about twenty years ago.

“When I was looking through these pictures, I came across this one where these two guys had carved a big bear,” said Gunter.

“I told him I would just take that log home, bring it back, set it back up and you know it was the same tree,” said Scarborough.

“I was tremendously impressed, he did a fantastic job,” said Gunter.

Nine feet tall, peeking over his fence into the neighbor’s yard, and this is even the biggest bear that Scarborough has carved.

“Sixteen-foot bear, this one would be like a baby. That bear is in Canada now,” said Scarborough.

Gary is super happy with the bear, but the jury is still out on getting more carvings.

“I thought about getting Floyd to do another one, but like the wife says, we do something like that and then we kind of want to go overboard, so we backed off on it,” said Scarborough.

Mr. Gunter’s neighbors love the bear, they say it’s like having a guardian angel looking over their fence.