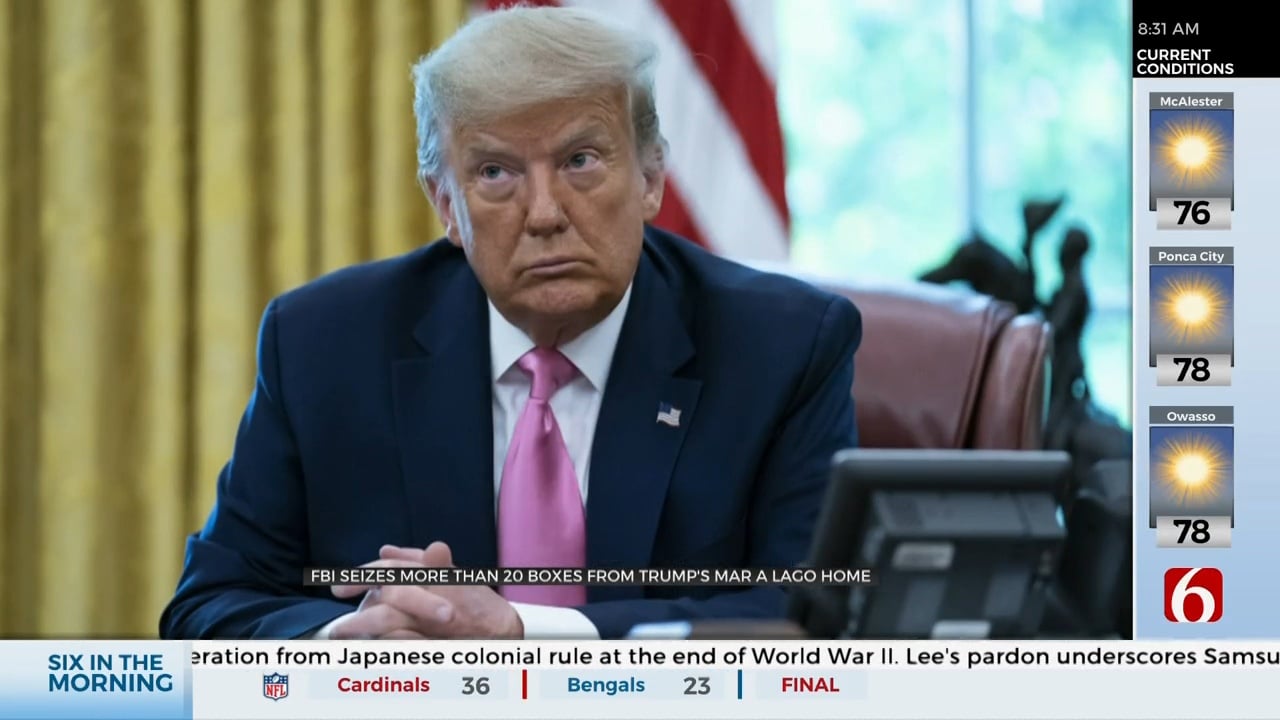 The federal government is investigating former President Trump for potential violation of three criminal statutes, including the Espionage Act, according to the unsealed search warrant that was executed at Trump's Mar-a-Lago residence Monday and reviewed by CBS News. The FBI seized 11 sets of classified documents, including four sets that were classified "top secret," according to the warrant.

According to the unsealed warrant, the FBI collected boxes marked top secret, secret and confidential, as well as documents marked "top secret/sensitive compartmented information," photos, and information about the president of France, among other things.

The ex-president's defense team on Friday did not object to the warrant's release. Trump himself said late Thursday in a statement that he encouraged the release. On Friday, he posted on Truth Social ahead of the warrant's release that the documents were "all declassified" and the FBI "didn't need to 'seize anything.'"

"They could have had it anytime they wanted without playing politics and breaking into Mar-a-Lago. It was in secured storage, with an additional lock put on as per their request," Trump posted. According to the warrant, federal law enforcement officials are investigating the former president for the destruction, removal or destruction of records, obstruction of an investigation, and violating a provision of the Espionage Act related to gathering, transmitting or losing defense information.

The search warrant was signed by a judge in federal court in Florida on August 5, several days ahead of the search.

Exactly what records the FBI took during its search is not yet clear, although two sources told CBS News on Monday that the FBI took boxes and documents while executing the search warrant at the former president's Florida home. The sources said no electronics were taken.

Property that would be seized, according to the warrant, entailed "all physical documents and records constituting evidence, contraband, fruits of crime or other items illegally possessed in violation of 18 U.S.C. § § 793, 2071, or 1519," the applicable legal codes.

The warrant applied to any government or presidential record created between Jan. 20, 2017 and Jan. 20, 2021, any records with classification documents, and any information regarding the retrieval, storage or transmission of national defense information or classified material. Federal authorities had permission to search the "45 Office," all storage rooms, and all other rooms or areas used or available to the former president and his staff in which records could be stored.

"The Biden administration is in obvious damage control after their botched raid where they seized the president's picture books, a 'hand written note,' and declassified documents," Trump spokesperson Taylor Budowich said in a statement Friday. "This raid of President Trump's home was not just unprecedented, but unnecessary—and now they are leaking lies and innuendos to try to explain away the weaponization of government against their dominant political opponent. This is outrageous."

In 2018, then-President Trump signed a law upgrading mishandling secret records from a misdemeanor to a felony. The signing followed Republican criticisms of Hillary Clinton's handling of classified information.

"Obviously, yes, there were concerns about him mishandling classified information," one former NSC official, who would only speak on background, told CBS in a phone interview, when asked about concerns by NSC officials. The official said Trump "mishandled" classified information with the Japanese and with the Russians. "That pissed people off," the official said. "We were very very careful about it."

A senior former Trump White House official confirmed to CBS News that Trump had a habit of reading documents, tearing them into pieces and depositing them in the garbage can.

Lower-level staff would painstakingly piece back together the documents with tape.

This former official described Trump as having "disdain" for the records retention process.

Major Garrett contributed to this report.