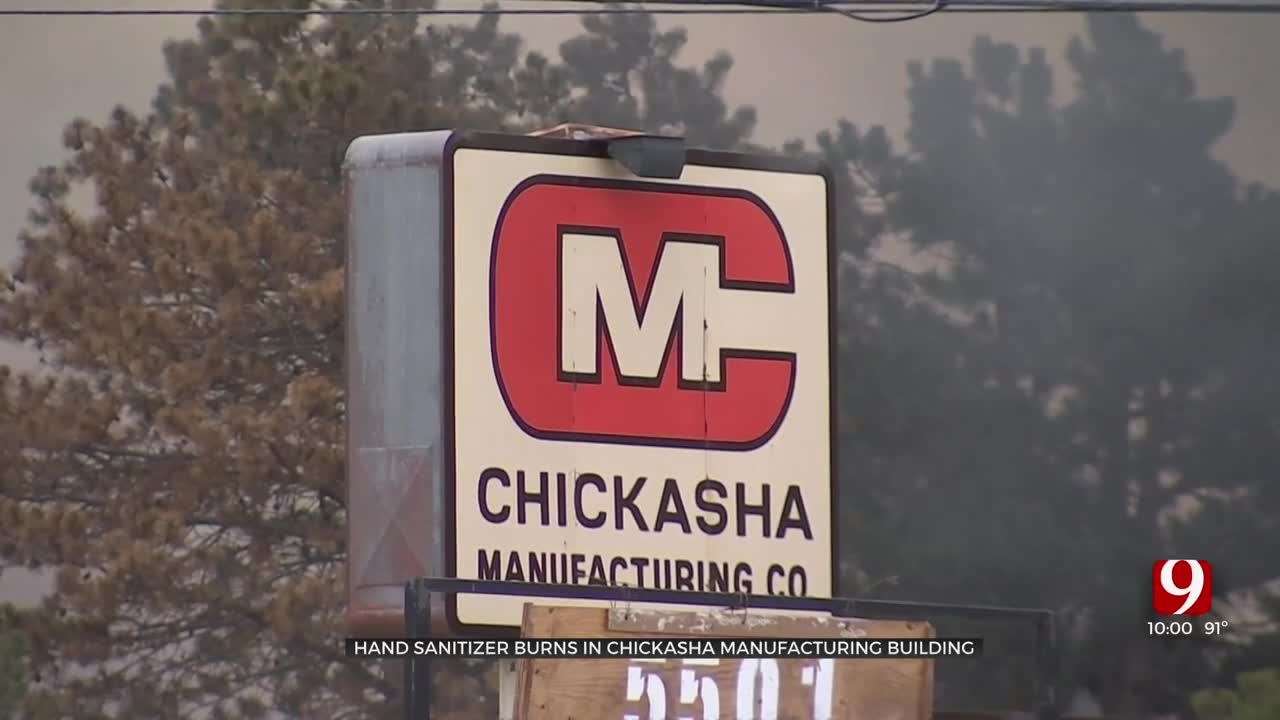 A massive fire burns down an old manufacturing building in Chickasha.

“They were tall, they were big, and they were hot,” said Alicia Musshafen, who lives nearby. “I was really in shock that the building was engulfed.”

Nearly 100 firefighters from 15 different agencies responded the fire, only to find their tactics had to change.

“Because of the nature of the incident we went into a defensive strategy immediately,” said Chief Samaniego.

That means they couldn’t attack the blaze with water because of the highly flammable and hazardous contents inside. Approximately 8,000 pallets of alcohol-based hand sanitizer kept the fire going for hours.

“It was roughly a 120,000-foot facility and from our understanding it was pretty much filled halfway up to the ceiling with these alcohol hand sanitizers,” Chief Samaniego said.

The Oklahoma State Fire Marshal’s office is helping in the investigation of not only the cause of the fire but also the storage of the hazardous liquid.

“We know that the building was not permitted to be occupied at this time,” said Judah Sheppard, an agent supervisor with the Oklahoma State Fire Marshal’s Office. “We’ve also received information of other warehouses or other large buildings being used for warehouse storage for products being shipped from out of state.”

Thomas Butler knows this all too well. He lives next to a building that is also housing hundreds of boxes of hand sanitizer.

“I have a propane tank in between the building and my house, and I don't want it to blow up and burn my house down,” he said.

He said for the past few months he's seen trucks delivering products at the storage building.

Brannan Bordwine, the owner of the company leasing the buildings, Bordwine Development, told News 9 he uses the buildings to store hand sanitizer and other products to be recycled at another location.

“We were only the receiving stage, where we were taking in the product,” he told us by email. “The two warehouses are dry storage only.”

Bordwine told us they unbox all the product and separate the liquid, which goes into a tanker for disposal. The rest of the materials are recycled.

“I have lost all of my equipment and livelihood,” he said. “I am grateful to all the firefighters that showed up to help.”

But for now, Thomas is afraid the second building is just a ticking bomb.

“I’m sure worried about it,” he said.

Sheppard is aware of the building next to Thomas and will include this in his investigation.

The Fire chief says they will closely monitor this fire until it burns itself out, which will likely take a couple of days.