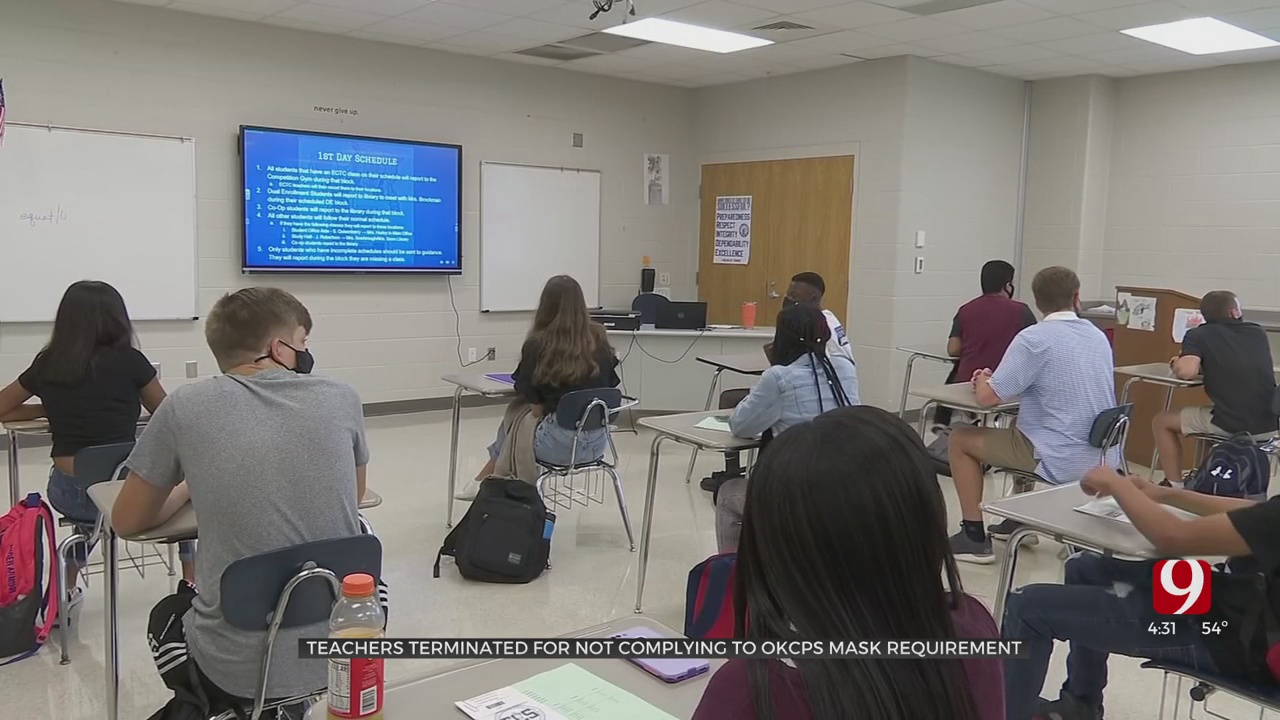 Five of the six educators from Oklahoma City Public Schools who were fired Wednesday announced they will be seeking damages for wrongful termination.

The district said they refused to wear masks after the implementation of the district’s mask requirement policy in August.

Some of the teachers who were fired became emotional at a news conference at Professional Oklahoma Educators where general counsel for the association spoke on their behalf.

Attorney Blake Sonne said Oklahoma City Public Schools Superintendent Sean McDaniels did not treat the plaintiffs fairly when he put them on paid administrative leave for refusing to wear masks and then recommending their termination.

The OKCPS Board of Education voted unanimously Wednesday night to fire the six educators. Five of them are included in the lawsuit.

“McDaniel, nine days after sending our teachers home, recommended that their jobs be eliminated with Oklahoma City,” Sonne said.

Attorneys emphasized that they felt the issue at hand is an employment issue, not a political one.

Sonne said these teachers felt they were standing up for the law by not wearing a mask and shouldn't be expected to be complicit in what they felt was violating state law.

The plaintiffs pushed back when OKCPS implemented a mask requirement this fall as cases spiked at the beginning of the school year, and refused to wear a mask while on school property.

There's now an injunction on that law in district court.

These teachers offered to comply with the schools' mask mandate while the court issue is resolved, but it was too late.

“Our efforts in reaching out to the district were rejected and in fact, Superintendent McDaniels issued an amended recommendation to terminate their employment, including an allegation that each of these teachers committed acts of moral turpitude, a label usually reserved for criminal or fraudulent acts,” Sonne said.

“OKCPS families could choose to opt students out of this requirement for medical, religious or personal reasons, and to date only 171 students have chosen to do so. That’s less than half of one percent of our student population. All district staff also had the opportunity to request a medical accommodation, if needed, and only 12 of our nearly 5,000 employees have chosen to do so.

"On August 26, 2021, six OKCPS educators were notified of the Superintendent’s recommendation for termination to the Board of Education following their refusal to comply with our mask requirement regulation. On September 24, 2021, the Court denied a request filed on behalf of the teachers and ruled that OKCPS can continue to require our staff to wear face coverings. Today, the Board of Education conducted due process hearings for the six OKCPS educators. Since these employees continue to refuse to follow a reasonable directive over a law that is unsettled, OKCPS board members voted unanimously to move forward with termination of these six teachers.”