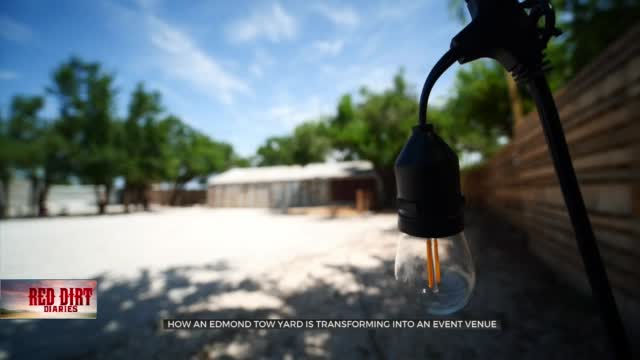 Rundown is turning rustic in Edmond.

A metro family with artistic talents is transforming a property on East 4th Street off of Broadway.

“It was actually the property of the original cotton gin in Edmond,” said Robert Looman

Looman is renovating the place with his son.

Recently, the property was also an old tow yard.

The property was originally purchased as a place to put his artwork, but the father and son team realized it could be a great concert and wedding venue.

“If he's crazy, I'm crazy. I think it takes a little bit of craziness in all of us to be great,” Zonly Looman said.

Robert Looman would prefer to be called clever over crazy. He’s proven to be very resourceful during the renovation.

Lumber with imperfections was bought at a discount.

“These were from Taco Bueno in Guthrie,” Robert Looman said about the chairs he bought at auction.

Robert Looman acquired a bar from Sooner Legends’ Inn in Norman to put in an original garage on the property.

A stage has been built and the location will be known as "The Gin."

“Stress is through the roof. (We have a) wedding this weekend. Rehearsal dinner Friday night. It’s pretty stressful,” Robert Looman said.

He wants everything to be perfect because his first client is his most important one.

“It's your daughter’s wedding. You got to do what you got to do,” Robert Looman said.

Robert and Zonly Looman, along with a few friends, were able to get to the wedding venue complete in time for the vows.

“It’s amazing what we are able to do,” Zonly Looman said.

“This is something that is not a phase, I don't think. I think its going to be here a long time,” Robert Looman said about “The Gin.”