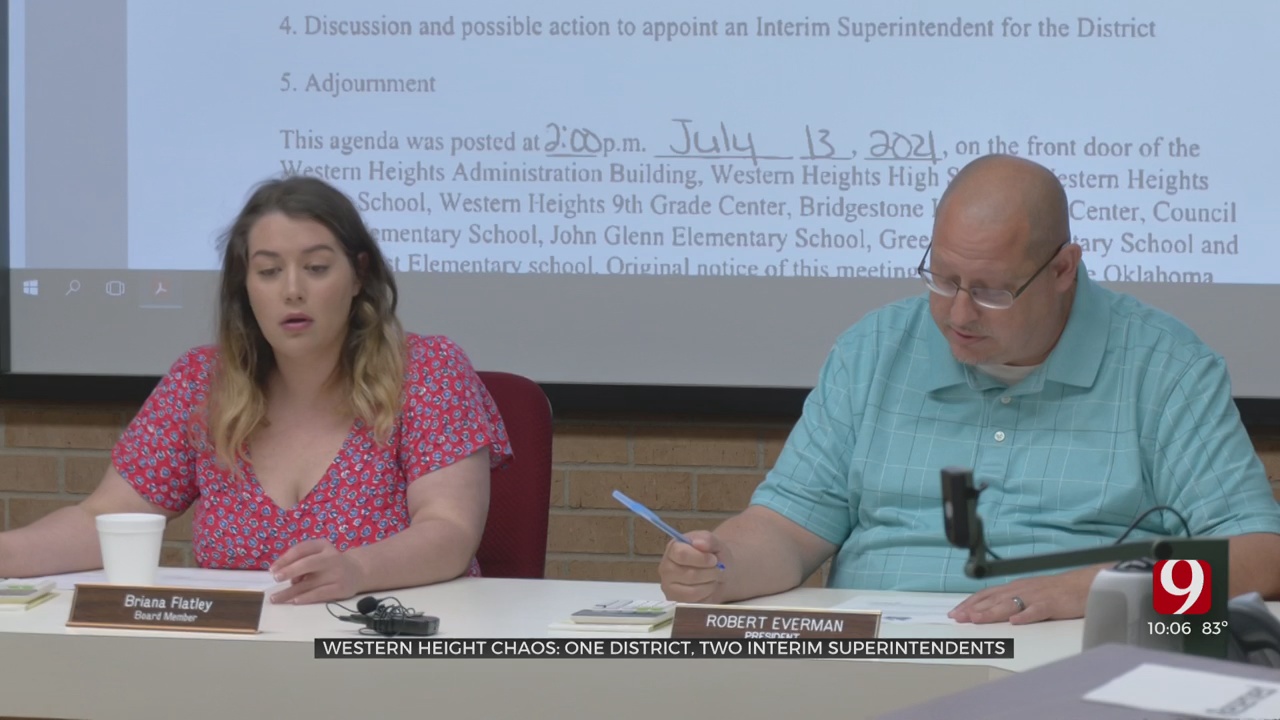 “Now we have essentially two superintendents,” said Briana Flatley, the sole board member to vote ‘no’ on the measure.

The board, led by President Robert Everman, voted 3-1 to appoint Kimberly Race, the district’s assistant superintendent, as interim superintendent after Mannix Barnes was forced out of the position by the Oklahoma State Board of Education last month.

Everman, Linda Farley, and Rosalind Cravens voted for Race’s appointment. Board member Robert Sharp was not present for Thursday’s meeting.

The gesture was seen by parents in attendance as a defiance to the State Board of Education, which voted unanimously on Monday to take over operations of the district for one year.

The state board cited significant drops in enrollment and staffing, concerns of financial mismanagement, and general “disharmony” between the public and administration for the takeover.

The state board appointed Monty Guthrie to serve as interim superintendent during the year-long intervention.

The WHPS board’s appointment of Race goes directly against the state’s takeover, which the district claims was done unlawfully.

“The school district of Western Heights challenges whether or not Ms. (State Superintendent Joy) Hofmeister or the state Board of Education has the authority or the jurisdiction to do anything that they’ve done. And that’s an issue for a future court date, no doubt,” Jerry Colclazier, attorney for WHPS said at Thursday’s meeting.

Everman, Farley, and Cravens left the meeting room immediately and did not stay for media questions. Oklahoma City police officers cleared out the board room shortly after the meeting ended at the request of district staff.

A spokesperson for the Oklahoma State Department of Education, Carrie Burkhardt, said the WHPS board meeting to appoint Race was “inappropriate” and “invalid.”

“Sadly, this latest act was again in disregard of state authority, possibly subjected individual school board members to personal liability and attempted to install someone they swore to the court last week was not qualified or prepared.” Burkhardt said. “Students, families and staff of Western Heights Public Schools can take comfort that this farce is soon coming to an end.”

Last week, Race described herself as unqualified to be superintendent on several fronts in a court filing.

Race submitted an affidavit as part of the district’s lawsuit against Hofmeister and OSDE, which spawned from the state placing WHPS on probation.

In the affidavit, Race wrote, "I have no experience in this area,” referring to insurance claims, construction projects, and negotiations with the local teachers union, for which the district superintendent is responsible.

Race did not respond to an email requesting a comment Thursday evening.

Flatley told reporters after Thursday’s meeting that the district may be at risk of personal or criminal litigation because of the defiance to the state’s order.

“I did feel like just being in attendance at the meeting could be some sort of you know, liability for myself,” Flatley said.