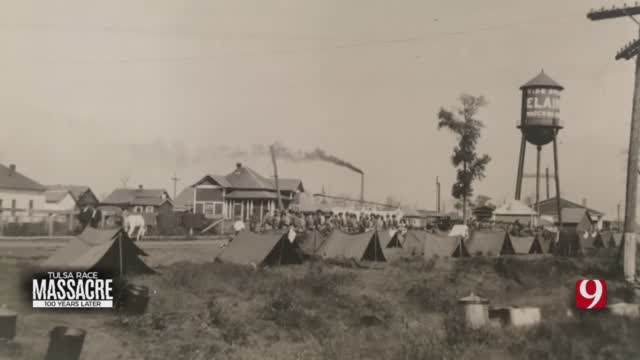 Elaine, Arkansas is in the Mississippi Delta.

The town of a few hundred people that is not far from the river is surrounded by rich farmland; but to this day, it is shrouded in a tragic history.

“Everybody was out for blood. As one quote said, “’The shot everything that was moving,”’ Mitchell said.

And James White, a Race Massacre descendant explained there was no chance to heal.

In 1919 group of underpaid Black sharecroppers met at a church to form a union. Many of them fought in World War I.

They were attacked. And they returned fire.

White veterans of the American Legion were deputized, and federal troops even shot and killed 20 African American men. Men who thought the soldiers came to protect them.

“When the soldiers cam in, the killing didn’t stop. Because they were killing, too,” White stated.

This violence became known as the Elaine Race Massacre. It was a week of hell where Blacks were hunted, arrested, and killed.

“The basis of the violence was just that these men wanted equality and better lives for their children. That’s it,” Dr. Mitchell said.

A scrapbook kept by Charles Brough, the Governor of Arkansas in 1919, which is now housed at the Arkansas State Archives, contains slanted newspaper accounts of the massacre.

However, oral history pasted down through families gives a better understanding of the fear of happened.

Kyle Miller, an Elaine Race Massacre descendant, shared the horrors of that time.

“They pulled them off the train and killed them,” Miller said.

Four of Miller’s great uncles were killed during the massacre.

Miller, who once lived in Tulsa, said there are similarities between the Elaine and Tulsa Race Massacres.

“Just like Tulsa, it was a place a place where African Americans felt like they could come, and they could thrive,” Miller explained.

James White shared that he thought there was jealousy: “there was a lot of jealousy.”

They had to run off at night; he saw people get lynched,” White stated.

Just like in the days and weeks following the Tulsa Race Massacre, people in Elaine fled the area to get to safety, which contributed to the northern migration of many African Americans.

Some left homes, or businesses, or farms. Some left with just the clothes on their back—just to get away from the constant threat of violence.

It is estimated hundreds of people died in the Elaine Massacre, and all are buried in unmarked mass graves.

It is very much like the Tulsa Massacre in that no records were kept of who was killed,” Dr. Mitchell said.

More than 90 people—all Black—were charged. All white juries convicted 12 union leaders. The NAACP argued their death penalty case before the U.S. Supreme Court, which ruled the men did not receive a fair trial.

The men were released, but they were never exonerated.

More than 100 years later, there is still so much that is unknown about what happened in the small town in the Mississippi River delta.

Descendants and historians promise to keep searching for the answers.

“People knowing these things, and knowing they happened, and what can happen when things are at the worst, is our best defense so that we do not repeat it,” Miller stated.

Dr. Mitchell stressed just how vital it is that these events are told. That these horrible events are remembered.

“We have to tell it; we have to teach it to our children,” Dr. Mitchell said.