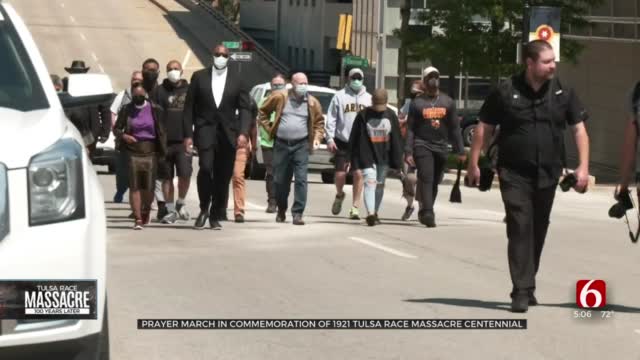 Religious and political leaders joined the Greenwood Arts and Cultural Society in a prayer march Friday to commemorate the 1921 Tulsa Race Massacre.

About 20 people marched one mile from Tulsa’s historic Vernon AME church to the entrance of City Hall. One participant said while it may have been a small group, they represent thousands.

The day started with singing and speakers from religious and political backgrounds. Oklahoma Democratic Chair Alicia Andrews was among those who marched. She said remembering the 1921 Race Massacre is important.

"The fact that the City of Tulsa has embraced the fact that we need to acknowledge it, I feel like we're making baby steps towards reconciliation because it does take accountability," said Andrews.

Friday’s speeches ranged from political messages to prayer focusing on finding justice for Race Massacre victims. The march was called Unity Over Violence, something Andrews said is an important part of the conversation.

Participants said a big part of the march was remembering, but also looking forward and continuing to fight for racial justice. Reverend T. Sheri Dickerson is with Black Lives Matter Oklahoma City and said we have come a long way, but much still needs to be done.

The march ended with participants praying for strength, courage, and wisdom.

The centennial of the 1921 Race Massacre is May 31st and June 1st. Several other organizations across the city are also planning events in the weeks to come.