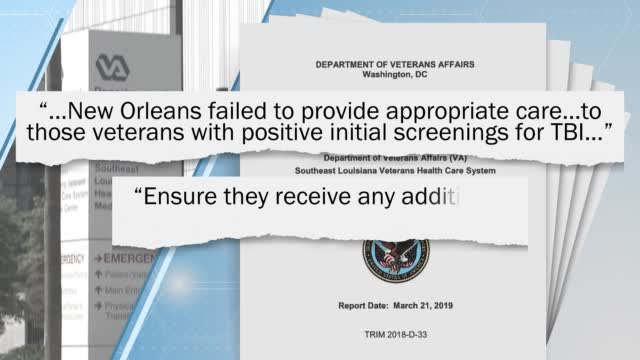 Army Sergeant Daniel Murphy did five decorated combat tours in Afghanistan and Iraq, specializing in detonating battlefield explosives. Honorably discharged in 2013, Murphy suffered physically and psychologically. He had the classic symptoms of post-traumatic stress disorder—insomnia, anxiety, and a feeling that the enemy was lurking around every corner.

"We'd have stories together as children, and he would misconstrue the stories," Jim Murphy told CBS News chief investigative correspondent Jim Axelrod. "We could sense something was wrong. He knew something was wrong with himself."

Two VA sources confirm Murphy initially tested positive for a traumatic brain injury, or TBI, when he visited the New Orleans VA in June 2017. He told doctors he had been previously diagnosed with a TBI on active duty, when his Humvee hit an IED. Nevertheless, he did not receive a final TBI diagnosis or TBI treatment. Two months later, he took his own life. He was 32 years old.

"The last thing that my brother texted me was, 'hope to talk to you later,'" said Jim Murphy, who blames the VA for his brother's death. "I miss him."

Dan Murphy's story haunts Dr. Frederic Sautter who retired last month as the head of the family mental health program at the Southeast Louisiana Veterans Healthcare System, also known as the New Orleans VA. Sautter said Murphy was one of hundreds of Iraq and Afghanistan vets from 2009 to 2019 who were not properly assessed for a traumatic brain injury in New Orleans.

"These are people who need to be identified," Sautter told Axelrod. "They need to be brought into the VA and evaluated."

A psychologist who spent nearly three decades counseling vets suffering from post-traumatic stress disorder (PTSD), Sautter started to grow suspicious about the quality of care at the VA in New Orleans in 2017. He said many of his patients with PTSD, a psychological condition, were also presenting symptoms of a traumatic brain injury, which is a physical wound. Yet they hadn't been diagnosed or treated for a TBI. Research shows vets with TBI are twice as likely to die by suicide.

"Most of my patients have been in a vehicle that's hit an IED [improvised explosive device] and exploded," Sautter said. "I was noticing many of them were having headaches, having memory problems."

Sautter wanted to find out why so few of his patients had a TBI diagnosis, so he set out to identify vets who had received the diagnosis at the New Orleans VA.

"So deviant a number"

VA protocol requires all Iraq and Afghanistan vets to undergo a simple four-question screen for TBI during their first visit to any VA facility. A positive screen leads to further evaluation.

According to internal VA documents from the department's medical inspector, obtained by CBS News, most vets who receive further evaluation are ultimately diagnosed with TBI — 60% to 80% of patients across all VA hospitals.

But at New Orleans VA, Sautter found it was far lower — just 18%, about a quarter of the national average.

"It was so deviant a number," Sautter told CBS News.

Sautter said he found nearly 600 vets who had further evaluation conducted by a neuropsychologist at New Orleans VA named John Mendoza. Sautter said Mendoza diagnosed TBI at an even lower rate — in just 9% of the vets he saw.

In July 2017, Daniel Murphy saw Dr. Mendoza after he screened positive for a traumatic brain injury. Mendoza's notes indicate Murphy complained of memory loss. And yet, while Mendoza diagnosed PTSD and depression, he wrote "there was nothing presented to suggest possible TBI." Without a diagnosis, there would be no TBI treatment. Six weeks later, Daniel Murphy hanged himself.

Mendoza, who retired in 2017, did not respond to our request for comment.

The VA declined our request for an interview. In a statement to CBS News, the department said it's "committed to safe, well-coordinated care for those who have sacrificed for our nation."

Upon discovering the low rate of diagnosis at the New Orleans VA, Sautter said he compiled a list of vets who screened positive for a possible traumatic brain injury but never got the VA-mandated follow-up. He said there were hundreds who didn't receive the proper care.

Sautter said he brought the list to colleagues in the hospital's Pain Management and Rehabilitation (PM&R) division, the unit charged with treating TBI. Among them, was Priscilla Peltier, a registered nurse who started working in PM&R in June 2017.

"It was a list compiled of veterans who basically just slipped through the cracks," Peltier told Axelrod. "There was absolutely no treatment being provided to them."

So in October 2017, Peltier and her team pitched a plan to her boss, the chief of PM&R, Dr. Robert Mipro. They would contact vets on the list and bring them into the VA for re-evaluation.

That's when Peltier said Mipro told them, the list was not their concern and to "lose the list."

"How could we not try to do something?" she said. "That's why we're there. We took an oath. I took an oath when I became a nurse."

Mipro declined our request for an interview. The VA denied that Mipro was personally resistant to re-evaluating the veterans on Sautter's list. In a statement the department said, "Dr. Robert Mipro was thoroughly vetted for his current position and has the full confidence and support of the Southeast Louisiana Veterans Health Care System leadership team."

"These problems don't happen unless there's people who are allowing it to happen," Sautter said.

Sautter pressed the VA to investigate his allegations, first through the VA's Office of Inspector General and then through the Office of Special Counsel.

The OSC ordered an internal investigation by the VA's medical inspector, which produced a report in March 2019 obtained by CBS News that was never made public. Although it "did not identify a specific danger to public health and safety," the medical inspector's investigation concluded: "New Orleans failed to provide appropriate care … to those veterans with positive initial screening for TBI."

The medical inspector's report also confirmed New Orleans' relatively low TBI diagnosis rate of 18%, compared to a national average of 60% to 80% from 2008 through 2018. After CBS News' initial story aired Wednesday, and a month after we first contacted them, a VA spokesperson said the medical inspector's report had relied on "bad data." He said the TBI diagnosis rates in New Orleans were in line with the national average, but did not provide any new underlying data, in response to a request from CBS News.

The medical inspector's report also called for the VA to contact and re-evaluate any vets who did not receive proper follow-up for a traumatic brain injury. The VA told CBS News it followed through on all the recommendations in the report, but the experience of one Iraq vet who spoke with CBS News suggests at least some vets were missed. The vet, who asked we conceal his identity saying he fears retaliation from the VA, said he did not receive the proper follow-up after testing positive for a traumatic brain injury.

"It's a farce," said Peltier. "They're our nation's heroes who deserve the best care. You know you're going into some bureaucracy when you enter, but nothing could prepare you for how blatantly, incredibly bad the denial of care is."