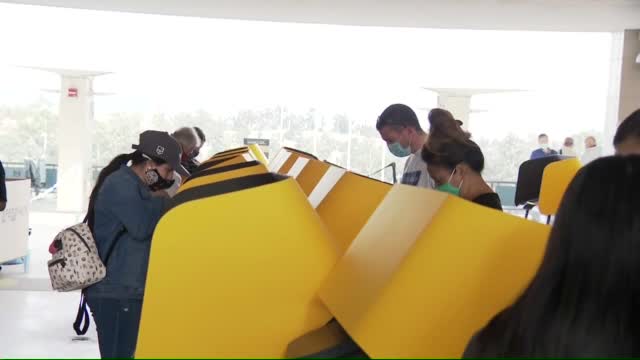 As voters head to the polls on Tuesday, it's becoming more uncertain if the country will have a projected winner by the end of the day in the presidential race.

“If the margin is close, like in any race to get to a final tally it always takes time,” said UCLA political science assistant professor Dan Thompson.

He said a record surge of mail-in votes triggered by the coronavirus pandemic could leave some states needing more time to count their ballots.

The rules for processing and counting mail-in votes vary from state to state, and most begin processing those ballots before Election Day, but when it comes to actually counting the ballots, at least 30 states legally can't begin until Election Day. That includes Pennsylvania, where a handful of counties won’t begin counting until Nov. 4.

"Election administrators have been focused on this issue for many, many months and I think, by and large, they've been preparing for exactly these types of concerns,” Thompson said.

In some states, mail-in ballots arriving after Election Day could also delay the final results. The question of how late those ballots will be accepted has prompted a number of legal challenges this year.

Just last week, the Supreme Court said absentee ballots in North Carolina can arrive up to nine days after Nov. 3. The decision came after the high court decided ballots won't be accepted in Wisconsin if they arrive after the polls close on Election Day.

Those outcomes are part of a record-setting number of election-related lawsuits this year, with more than 300 filed in 46 states. Experts think we'll likely see more legal challenges once the vote tally begins.