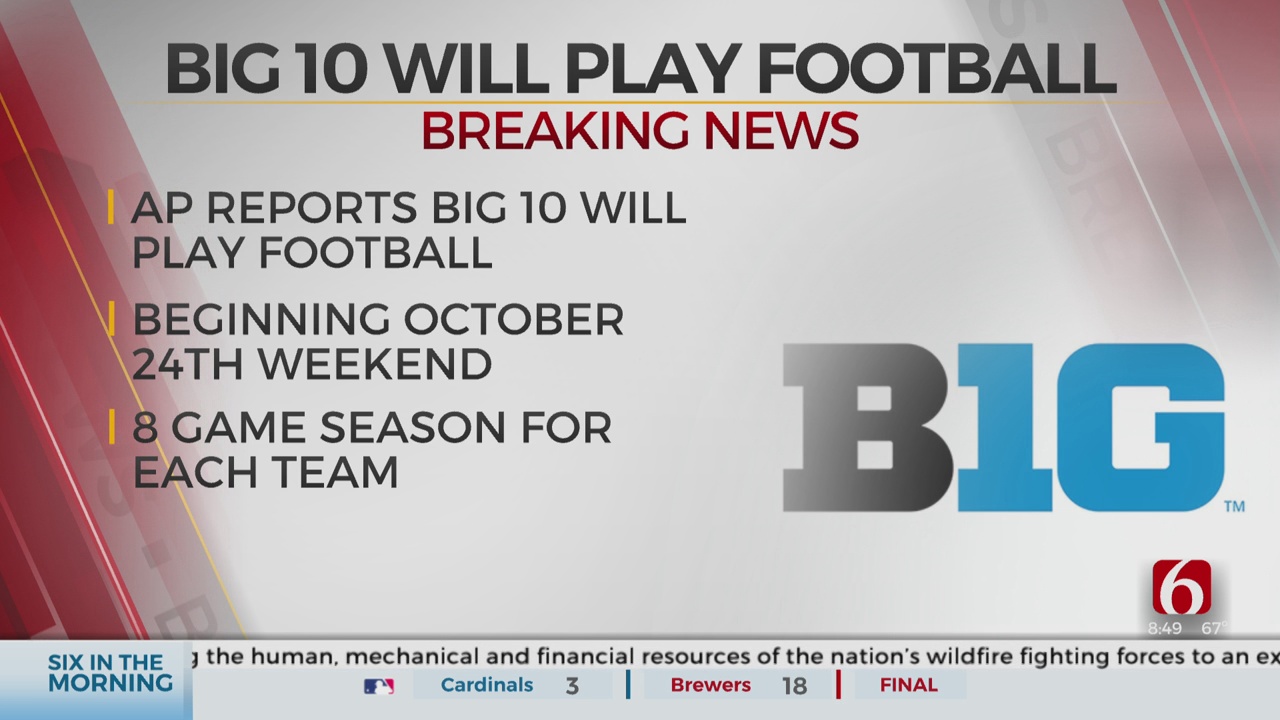 The Big Ten presidents and chancellors have voted to play football in 2020, sources told CBS Sports' Dennis Dodd. The conference will begin its season the weekend of Oct. 24 and feature daily, rapid testing as a focal point of the plan. Additionally, the Big Ten is expected to unveil new information on myocarditis screening and the league can safely test for myocarditis in the wake of any positive tests.

Both of those concerns were major points in the Big Ten's original decision to cancel football for the fall. An announcement from the league is "imminent" and could come as soon as Wednesday morning.

On Tuesday, Nebraska president Ted Carter was caught during a hot mic moment saying that a vote by the Big Ten was going to come during the evening. Cater later said his comments were taken out of context.

University of Wisconsin chancellor Rebecca Blank added on Tuesday that "we will try to plan a delayed season" once previous concerns have been addressed. The conference initially canceled football for 2020 due to questions about COVID-19 testing and tracing, along with other longer-term heart issues.

The conference's medical subcommittee of the return to competition task force met Saturday with eight of the league's presidents and chancellors, according to multiple outlets. The purpose of the meeting was reportedly to share updated medical information, including the availability for more widespread rapid response antigen testing that could allow teams to test daily while decreasing the need for contact tracing.

Additionally, new information about myocarditis -- and inflammation of the heart muscle -- was expected to be shared. Part of the Big Ten's decision to eschew football for a later date was based on a study outlining concerns over myocarditis and its links to COVID-19.

Sunday's meeting, meanwhile, was expected to include more logistical hurdles: when/how to start, minimum thresholds for competition and the like. Multiple return dates have previously been tossed around, including Thanksgiving weekend and Oct. 10 According to ESPN, a mid-October return date would be the absolute earliest the Big Ten could restart football based on testing availability. A Big Ten source told CBS Sports' Dennis Dodd previously that an Oct. 10 return date "wasn't happening."

The revote is a result of the considerable backlash for the Big Ten's initial decision, which went 11-3 with only Ohio State, Nebraska and Iowa electing to play football. Most notably, the conference and commissioner Kevin Warren received pushback for their muddled message and inability to get on the same page from the member presidents on down to the coaches and players. The Big Ten has since fought a multi-front PR battle as it received pressure from players, coaches, parents, and even President Donald Trump. In an open letter eight days after canceling football, Warren said that the Big Ten's decision would not be revisited.

That obviously changed. To reverse the vote, the league needs nine of 14 votes, meaning six presidents or chancellors who previously voted to cancel football have to change course. Still, there remain numerous roadblocks for an actual return to football. Wisconsin football and hockey, for example, paused for two weeks after a rash of COVID positives. Meanwhile, games across the country continue to be postponed left and right. Virginia-Virginia Tech, Houston-Memphis, Army-BYU and SMU-TCU are just some of the games that will have to either find a new date or be canceled altogether.