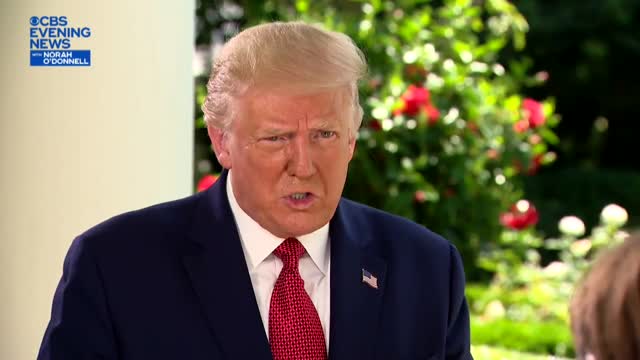 President Trump slammed school districts that are hesitant to reopen for in-person classes in the fall over concerns about the coronavirus pandemic, telling CBS News that the districts were making a "terrible decision."

Mr. Trump told CBS News senior investigative correspondent Catherine Herridge that the Los Angeles Unified School District had made a "mistake" in deciding not to reopen in the fall, joining a number of school districts across the country who have said the same.

"What do you tell parents and teachers who feel that it is unsafe to go back?" Herridge asked Mr. Trump.

"I would tell parents and teachers that you should find yourself a new person whoever is in charge of that decision, because it's a terrible decision," Mr. Trump said. "Because children and parents are dying from that trauma, too. They're dying because they can't do what they're doing. Mothers can't go to work because all of a sudden they have to stay home and watch their child, and fathers."

The president said that being unable to send children to school puts a "tremendous strain" on parents, and called the issue a "balancing act."

"We have to open our schools," Mr. Trump said. The president has repeatedly pushed for reopening schools and universities in the fall, even as coronavirus cases climb in dozens of states.

Mr. Trump said opponents of reopening schools are making a political calculation, hoping to keep him from winning a second term in office.

"I also say a decision like that is politics, because we're starting to do very well in the polls, because I'm for law and order. I'm for strong business. Our jobs are coming back at a record level like we've never seen anything like it. Record level. We're heading up. It's turning out to be the V just like — I built it once before, the strongest economy ever. I'm doing it again," Mr. Trump said. He added that "they don't want it to happen," referring to "the Democrats and the radical left."

Mr. Trump's comments come amid uncertainty over whether the administration would revise guidelines by the Centers for Disease Control and Prevention for reopening schools. Mr. Trump slammed the guidelines as as "very tough & expensive" in a tweet last week.

However, CDC Director Dr. Robert Redfield also said last week that the CDC is not planning on rewriting guidelines for educators for reopening schools. He said the agency would issue "additional reference documents," but added that these documents are "not a revision of the guidelines."