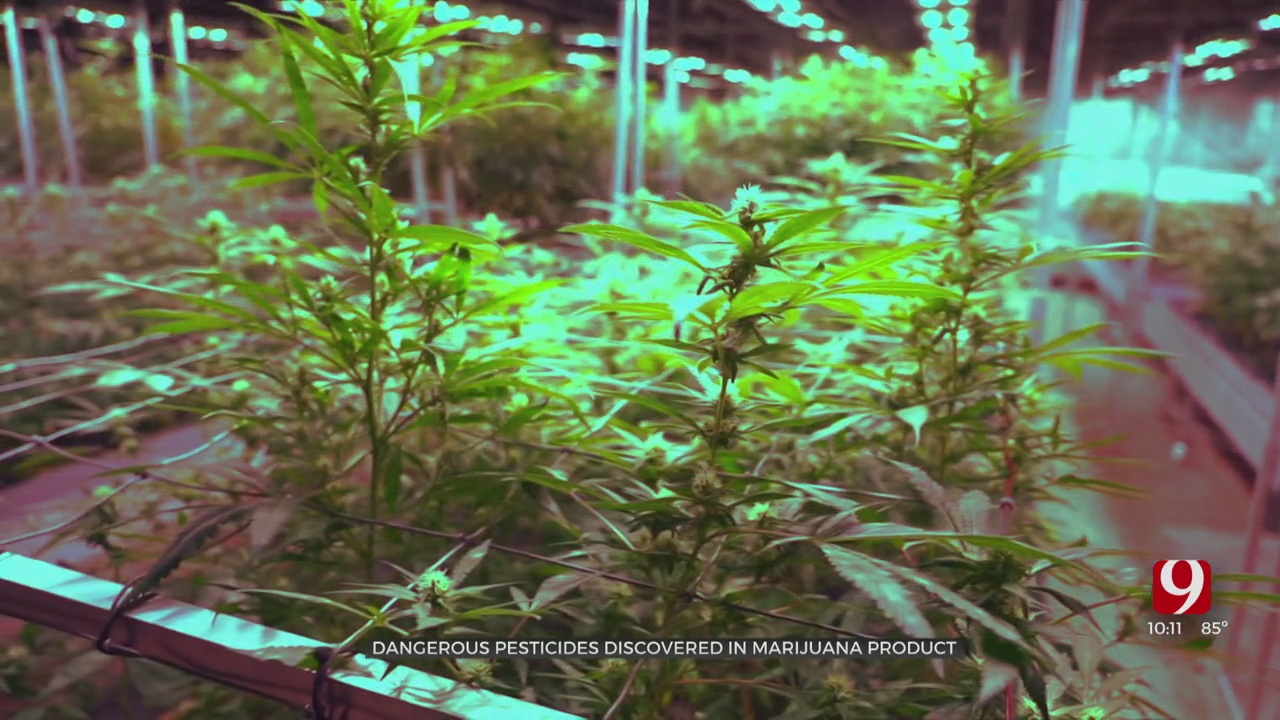 For almost two years medical marijuana has been for sale in the state and Oklahomans have bought over half a billion dollars’ worth. Now for the first time, dangerous pesticides have been discovered in a product sold and consumed.

“Bumps started popping up in my mouth and the sore throat started acting up real bad,” said Meksula, who has had his medical marijuana license since 2019. He said the more he used the Moon Mix vape the worse it got. The blisters grew bigger and then he started throwing up and had diarrhea.

“Went to go start finishing it off and I got sick again. I started having breathing problems and I told my wife I don’t know. It almost feels like I have coronavirus. She said I don’t know I think it has something to do with that vape.”

Turns out, Meksula was using batch 158 of Moon Mix that the OMMA recalled after test results found it had dangerous levels of Myclobutanil, a fungicide banned in Oklahoma and several other states.

“Some of these pesticides we’re talking about when heating up and vaporized turn to hydrogen cyanide gas which could kill you,” said attorney Collin Rockett.

Rockett said his list is growing of those who were impacted.

“Between my partner and I we’ve talked to somewhere around 10 people that have experienced similar symptoms to Mr. Meksula,” he said.

In Oklahoma all medical marijuana is required to be tested both at the grower and processor and provide those test results to the dispensaries. The test results that Moon Mix provided to dispensaries showed passing levels of all pesticides.

The owner of another lab told News 9 they tipped off OMMA of a failed test result. OMMA said they discovered a previously failed test of the batch through a newly enacted quality assurance system. OMMA then had the product tested again several times, all revealed Myclobutanil levels more than 10 times over the legal limits.

“I think it’s possible that this could be happening a lot more than we realize if not happened numerous times in the past,” Rockett said.

OMMA Director Travis Kirkpatrick said he can’t speculate on that. He took over the agency in November and said he is trying to make sure it doesn’t happen again.

“On the way the lab licensing was laid out because of some of the unity provisions in the legislature it didn’t give us a whole lot of ability to put all the pieces together like you usually see,” he explained.

He said beginning July 1 all labs will have to be certified by the state.

“Do you think that will help something like this from happening again?” News 9 asked him.

“Absolutely.” He said. “I think of it like chokepoints. We have seventeen labs that are licensed. They have skin in the game of our license.”

In the case of Moon Mix, OMMA said they sent out notifications to all licensees and dispensaries just to be safe, a total of 300,000 notices.

But Meksula said he found out too late.

“I’ve spent days and nights up crying because I don’t know what’s going to happen. I don’t know if there’s a long-term effect of this. I don’t know that in a couple weeks from now I’m not going to end up with cancer or something. That’s ultimately going to kill me.”

News 9 asked Moon Mix several questions in regards to our investigation. Here is their response:

A: Shocked. Absolutely shocked. We tested Batch 158 prior to any sales, and it tested negative for pesticides. So, we couldn’t believe it at first. We take product testing and patient safety very seriously at Moon Mix, and we found these results deeply concerning.

2. Can you explain what happened that the test results that were given to dispensaries on the recalled product were different than when the product was later tested by OMMA?

A: We had Batch 158 tested on March 4, prior to any products going to any dispensaries, and the batch tested negative for all pesticides. Since then, between the testing conducted by OMMA, and the follow-up testing we’ve conducted at our own expense, the batch has tested positive for pesticides, but at wildly variable levels. We’re not sure what accounts for all these discrepancies, but we’re definitely concerned about the swing in results. At the same time, laboratory testing is one of the newest parts of the medical marijuana industry, and clearly there’s room for improvement. OMMA has required licensees to perform laboratory testing prior to any sales since almost the beginning of the program, but the requirement that licensees use a lab actually licensed by OMMA to perform their testing hasn’t even gone into effect yet (it was scheduled to go into effect April 1st, but the agency moved the deadline back to July 1st at the start of the COVID-19 emergency). Another important component of the laboratory testing system which also hasn’t come into effect yet is the independent quality-assurance laboratory, which will set workable statewide standards on laboratory testing. We think that will also help prevent testing failures like the one that happened here.

3. Was Moon Mix aware of the pesticides in the product before the recall?

A: No. Moon Mix first became aware that any Batch 158 products had tested positive for pesticides on May 13, when OMMA notified us they would be making the recall request.

4. Was Moon Mix aware of a negative test result before the recall?

5. Do you think this could have happened before in other batches that wasn’t detected?

A: Hard to say, but when you get a test result back which says you’ve passed everything, and later testing shows the batch shouldn’t have passed, you have to worry about the possibility this could have happened before, with us or any other medical marijuana licensee.

6. Does Moon Mix grow its own product or get if from another grower?

A: Moon Mix isn’t a licensed grower and gets all its medical marijuana flower from grower licensees.

7. What is Moon Mix doing to prevent this from happening again?

A: First, we’re cooperating fully with OMMA. We’ve dedicated our entire staff to responding to this recall request, individually contacting every single dispensary who received Batch 158 products, following up multiple times to ensure we get responses, and getting back as many products as we can. We’re also providing OMMA all the documentation they’ve asked for, as well as full access to our staff, our records, and our facility. Second, as I said earlier, we’ve conducted our own follow-up testing on Batch 158 products, to confirm the presence of pesticides, and to try and get a clearer picture of the levels. However, the wild swings in the testing results haven’t been much help. Inside the company, we’ve also conducted a sweeping and thorough examination of all of our processes to make sure there’s no danger of this ever happening again. Medical marijuana processing is a science, and we’ve taken a scientific approach to this problem, developing theories for what might have happened and testing them against the facts. We’re not in a place yet where we can say with any certainty what happened, but as soon as we think we know, we intend to report our findings to OMMA. If there are better processes which all licensees can put into place to ensure this doesn’t happen again, we want to help contribute to that. This has been a learning process for our company, to say the least, and if what we’ve gone through can help improve the medical marijuana program, we want to share what we’ve learned.