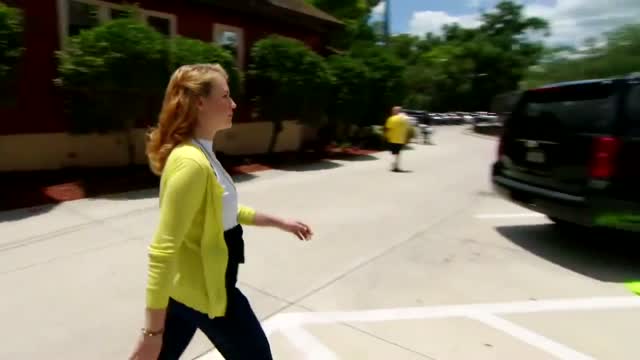 Many people are being pushed closer to homelessness amid the economic collapse caused by the pandemic. Even before the coronavirus, some 38 million Americans were living in poverty and more than 6 million were considered at risk of becoming homeless.

Johnson and her younger brother were two of the 16 million children living in poverty after the Great Recession. Their mother died when they were young, and their father had lost the family house in Seminole County, Florida. In 2011, they spoke with 60 Minutes correspondent Scott Pelley when they were living in a yellow delivery truck.

"It's an adventure," Johnson told Pelley at the time. Back then, her name was Arielle Metzger.

She said it wasn't "really that much of an embarrassment," even when other kids found out.

"I mean, it's only life. You do what you need to do, right?" she told Pelley.

Asked about that poise now, Johnson told Dokoupil that "it came from hope."

"It came from hope for a better future," she said.

"Maybe 10, 15, 20 minutes after our section ended, there were people in our community who drove up and said, 'Hey, we wanted to give you some things,'" she said. "That was when it really hit for me that there are people who are out there who really do care still."

One of those people was the president of Stetson University, who noticed Johnson wearing a second-hand Stetson shirt in the report and offered her a full scholarship.

"It was incredible. And it — honestly, it changed my life," Johnson said.

But she still needed to get in. After her father lost custody, she bounced around foster care families, and very nearly gave up.

But then, at 17, Johnson was adopted into a large and loving family, who encouraged her to get back in touch with Stetson, which she did.

At the university, Johnson said she "totally blended in with the crowd."

"That's how I wanted it. I mean, a part of me did want to update the world that I finally made it and I was here, but at the same time, like, I just wanted to be a normal kid," she said.

But last year, as a junior, she decided she was ready to stand out again.

At a major conference on homelessness, one of her mentors, Professor Rajni Shankar-Brown, introduced a familiar 60 Minutes report and then a certain young woman.

"It was amazing — just because it took so much strength for Autumn to have to come out, right, and to have to share that story, and to be vulnerable in front of hundreds of people," Shankar-Brown said. "We had everybody in tears, but in a good way because hearts were opened."

This month, nearly 10 years to the day she first moved into that truck, Johnson graduated on the Dean's List and with plans to continue on to law school.

"There are times where I look back, and I'm like, 'I shouldn't even be here,'" Johnson said. "But I know that this is a gift, and I've learned to accept gifts, and I'm thankful for it."

Johnson says the lesson in her story is that homelessness is not the same as hopelessness and that education really is a ticket out. Her brother, Aaron Johnson, was adopted into the same family as Autumn and is also doing well after his sophomore year at Stetson.