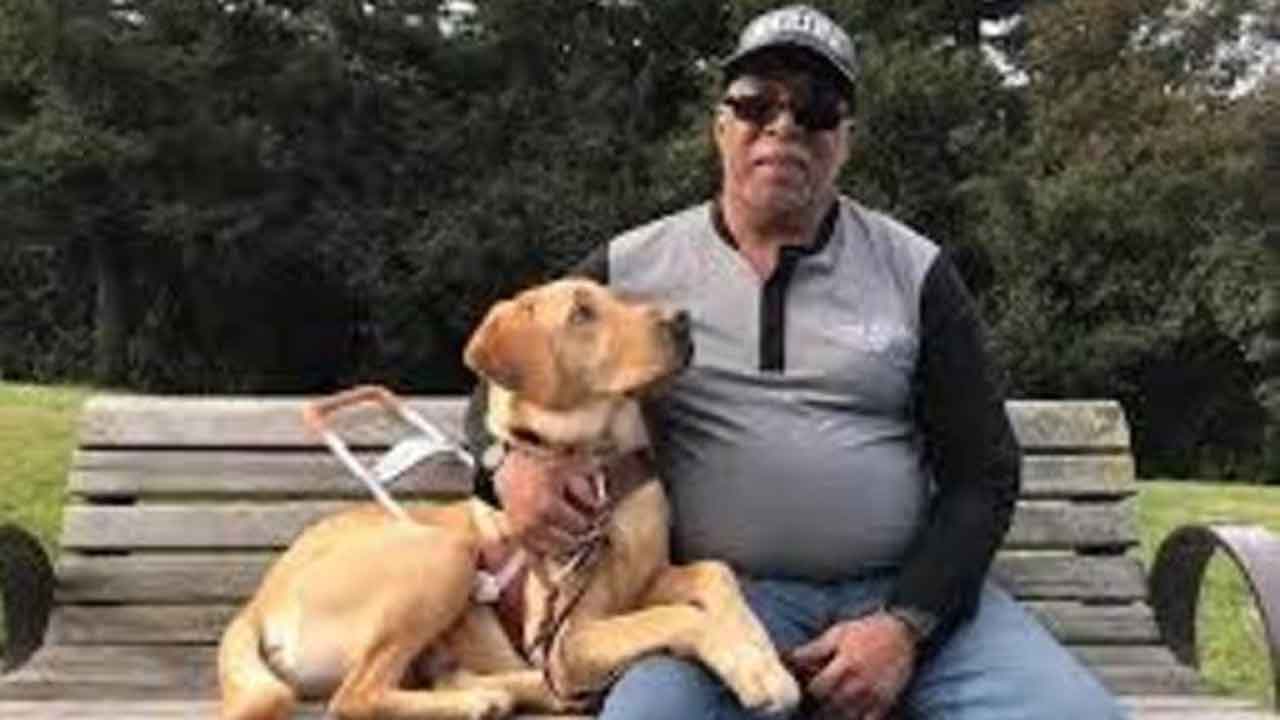 Vietnam veteran Joe Tasby was admitted to a Nevada hospital in March with his guide dog, Cupid, by his side. When the hospital went into lockdown due to the coronavirus crisis and visitors couldn't stop by to care for Cupid, he needed help. That's when nurse Barbara Borbeck stepped in to care for them both.

Tasby, who is blind, went to HCA Healthcare's Southern Hills Hospital in Las Vegas in the middle of March, thinking he would only be there for "two or three days," he told CBS News. He was suffering from lung disease and had a heart arrhythmia, and was admitted right away with Cupid.

For the first several days he had visitors, including his daughter Tiffini, who helped feed and walk Cupid. But then things suddenly changed. "It was crazy when the hospital went into lockdown," Borbeck told CBS News. "We had a hospital full of visitors and people walking the hallways and then all of a sudden, the next day, it was, like, deserted."

The hospital no longer allowed visitors during lockdown, so Tasby worried how he would care for the yellow lab, who would remain with him during his stay.

"I got in the hospital at the time when the pandemic was just starting, all of a sudden I couldn't get visitors from outside and I had Cupid with me. I didn't know what I was going to do," Tasby told CBS News. "And then Barbara swooped in and came to the rescue — she took good care of us."

Each day for nearly three weeks, Borbeck, who is the hospital's medical-surgical and telemetry director, helped Tasby care for his beloved guide dog. "She came in first thing every morning and took him for a walk all around the hospital as she did her rounds, made sure he got outside, to get some air and exercise. She made sure he had food and treats." Tasby said. "Everything he needed she took care of."

Cupid began to grow fond of his helper during the hospital stay, waiting at the door each day for her to arrive and greeting her with a wagging tail. "He really took to her. Sometimes I would see him jumping up and down, and so excited and happy to see her," Tasby said. "He can usually tell if people have good spirit and no doubt, Barbara has a great spirit."

Barbara's dedication to Cupid and Tasby extended far beyond the hospital walls. Eventually, Cupid ran out of his special food during his stay and Barbara jumped to help.

"I didn't even have to ask her. She just said, 'What does he need?'" Tasby explained. "And then there you go, she went and did it. So, she's an exceptional person."

It wasn't always easy. She traveled to nine different stores in the area to find Cupid's special food, but it wasn't in stock. "I walk into the store, head right down to the aisle where the food was supposed to be and these empty shelves," Borbeck said. "And then there would be — just chaos."

But she didn't give up. The nurse drove 40 minutes one morning before her shift to a store that had it, to ensure Cupid had the right dinner.

"For her to take the time out of her life to find that particular brand of that particular choice of food was just beyond, beyond," Tasby said. "How do you really express gratitude when somebody steps up and does that for you in a time when it would be really difficult, next to impossible for me to do it."

While Borbeck certainly helped Cupid, she explained that the dog also helped the hospital staff during a tough time. She said that due to the lockdown, which is still ongoing, the hospital wasn't able to bring in the therapy dogs that regularly come into the facility.

"It was pretty intense here in the hospital and Cupid made the rounds," Borbeck said. "I took him to the different departments so that he could visit the staff."

After 21 days in the hospital, Tasby and Cupid were able to leave on April 1, with Barbara Borbeck walking them out the front door and all the way to the car.

"I left there thinking, 'I have to find some kind of way to show this lady how much I appreciate what she's done for us through a difficult time," Tasby explained. "It's fortunate when you meet somebody who is in the right place, at the right time, doing the right thing. And that is Barbara."