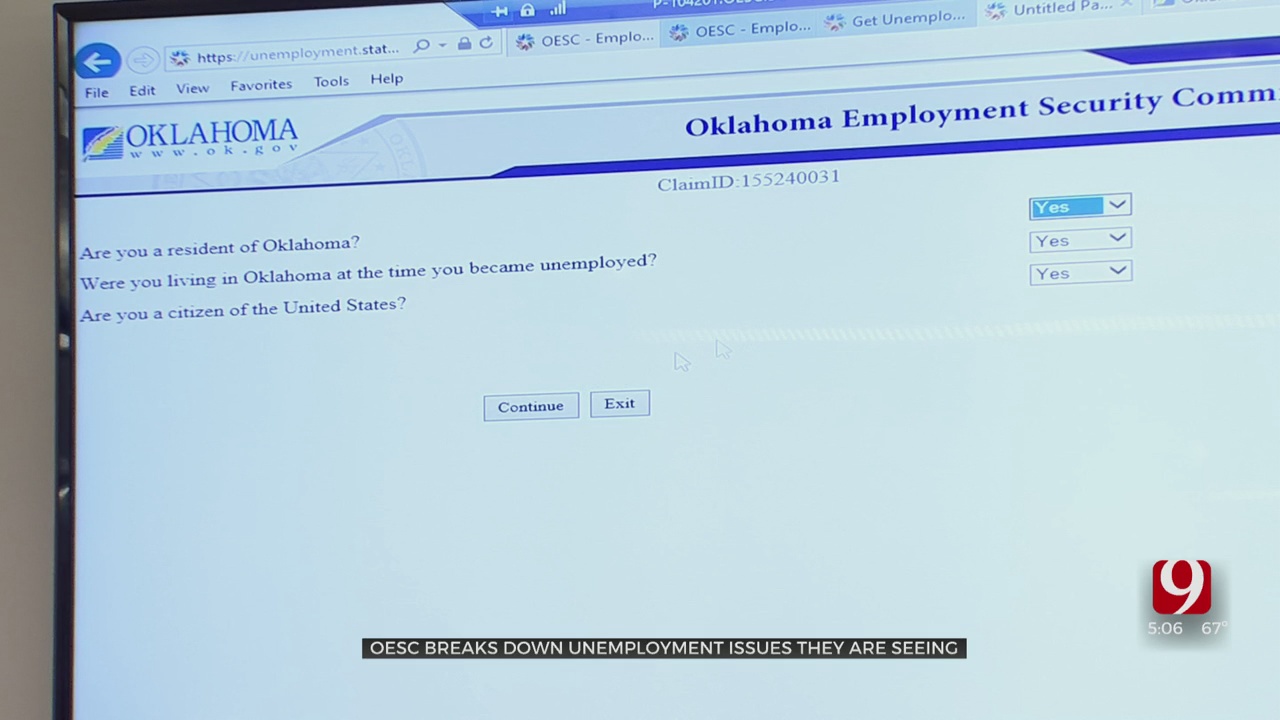 As tens of thousands of Oklahomans await unemployment benefits, officials said common errors could be to blame.

For instance, there are a variety of questions that could disqualify someone from receiving benefits.

However, what staff with the Office of Employment Security Commission are finding that website users could be entering information incorrectly.

Simply put, many Oklahomans are filling out the applications with COVID-19 in the back of their minds, and it’s altering the way they apply for unemployment, which delays their benefits.

As a result, OESC has devised a new way for handling those common mistakes.

“We have determined about four issue codes that we really — they are huge — as far as the volume we get. I think we have taken off about 80,000 at this time,” said Jim Polly, who works with the state agency.

Those questions typically include: self-employment, if someone is enrolled in school, if they have rolling furlough weeks, or changes from their original application.

Polly said that to keep benefits coming, your weekly application must remain consistent, or it flags the system.

Other top officials said they are working to update the technology.

That’s why half the website is filled with Oklahoma’s new branding and logo, and the other half of the process is the older version.

It’s not a scam, but could look suspicious to people who have never applied.

Oklahoma Secretary of Digital Transformation and Administration David Ostrowe said Oklahomans should the renovation was needed to become a one-stop-shop for citizens.

However, at times, they have an uphill battle.

As business were shut down all across Oklahoma, there is no shortage of fraud and scammers.

Ostrowe said the FBI and OSBI are helping them investigate the false claims.

In fact, the state announced Friday a task force has been created to combat the problem. Even city leaders have fallen victim.

“One was from Mayor Holt, one was from somebody else. We went back and looked at what was in common on these claims,” said Ostrowe.

The system is reportedly handling about 450,000 active claims.

Ostrowe said staff is working days, nights, weekends to sort through the chaos, and enhancing security.

“Citizens in the next 10 days, roughly, will have to downloaded the mobile ID, and register their driver’s license that will give a code and handshake to the website. Once we verify who you are, then the whole issue of using the paperwork system and the mail, we will have flexibility on how we roll those funds to you even faster. I can use PayPal. I can use Venmo. I can direct deposit your account,” said Ostrowe.

Another huge issue, according to OESC, is many people are not answering their phones.

They said as a rule, please pick up that unknown number or risk the waiting game until they can contact you again.