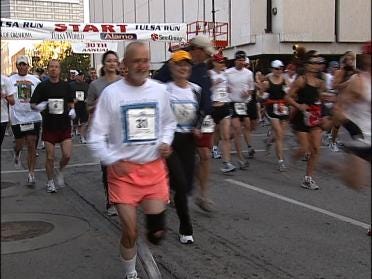 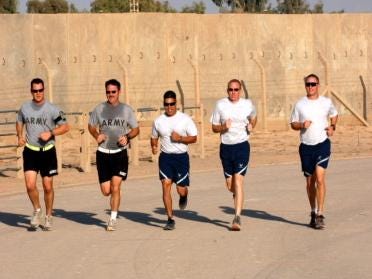 By Dan Bewley, for NEWS 9

TULSA, OK -- Downtown Tulsa will be flooded by thousands of runners for the 31st Annual Tulsa Run.  But, this year the run is taking on special meaning for members of Oklahoma's armed forces.

On Saturday morning while runners take to the starting line at 3rd and Boulder, 7,900 miles away, more than 500 servicemen and women will be wrapping up their own version of the Tulsa Run on a U.S. Military base.

Close to 10,000 runners are expected for a Tulsa tradition. All of those focused on the 9.3 miles in front of them, but many have thoughts a half-a-world away.

At the Joint Base Balad in Iraq, members of Oklahoma's Army and Air National Guard are also prepping for the Tulsa Run.  More than 500 servicemen and women, along with civilian contractors and runners from England and Uganda will be taking part in Iraq.

Chief Warrant Officer Tyson Phillips is from Owasso, and he's excited about the event.

"Well, Balad's a big base and we're going in and around Balad. We're going to run down near the flight line where the aircrafts take off and land. Then, we're also going to run by the combat support hospital which is where, from a MedEvac standpoint, we take our patients when we come inbound," said Chief Warrant Officer Tyson Phillips.

For the men and women, the Iraq version of the Tulsa Run is a way to stay connected with family.

"Our schedules differ so much that this was one of few things we can do and be together. This was a little part of home for me and a little part of here for them, so it was a good opportunity for all of us," said Chief Warrant Officer Phillips.

There's another way Oklahoma's troops will be honored on Saturday. For $1, runners can buy a back tag to pay tribute to a serviceman or woman. All the proceeds go to Operation Homefront to help the families in Oklahoma.

From Green Country to the Middle East, the Tulsa Run is helping Oklahoma's heroes show their loved ones they're doing okay.

"Not to worry about me. Life over here is not too bad and I'll be home soon and I miss everybody and love them all," said Chief Warrant Officer Phillips.

The run in Iraq is supposed to start at 10 p.m. Oklahoma time on Friday night, but the forecast there calls for sandstorms and rain.