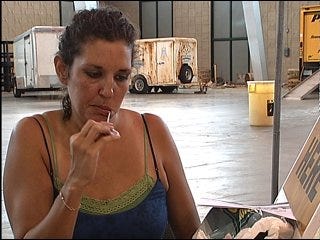 By Dan Bewley for NEWS 9

TULSA, Okla. -- A 10-year-old Shawnee girl is in desperate need of a life-saving doner and Tulsa residents are reaching out.

Tallie Anderson's biggest hurdle is something she can't control-- her ethnicity.  She's Native American.  This weekend at one of Tulsa's biggest pow-wows, the invitation is out for anyone who could save her life.

Amid the dancing, artwork, and craftsmen sits a table with a special mission.  Folks stopping by are asked to swab their cheek.

"Rub for about 10 seconds like you're brushing your teeth," advised Oklahoma Blood Institute's Stacy McLeod.

In the middle of the pow-wow, folks were using the brush to see if their DNA is a match.

The Oklahoma Blood Institute was invited to the IICOT Pow-Wow of Champions after a 10-year-old girl of Choctaw descent began making headlines in her fight for life.

"You're not able to fight off diseases, viruses, things like that," said McLeod.

Tallie's only hope is a bone marrow transplant, but to get one she has to find the perfect donor.

What makes Tallie's fate even more challenging is that Native Americans make up 1% of the National Bone Marrow Registry.

"Another example of our health issues that have been neglected," said pow-wow organizer Betty Brewer.

Tallie's crusade has brought potential donors from all walks of life.   For example, 84 football players from the University of Oklahoma added their name to the registry.

In Tulsa, Sherry Brown said signing up for the registry is a noble step for Native Americans.

"If somebody got sick, if it was your own family member, it's the same as giving blood," said Brown.

As for that swab, Brown said don't worry, it actually feels nice.

Anyone interested in becoming a donor can join the registry at the pow-wow which continues on Sunday at the QuikTrip Center at the Tulsa County Fairgrounds.  They are looking for donors of all races, not just Native Americans.