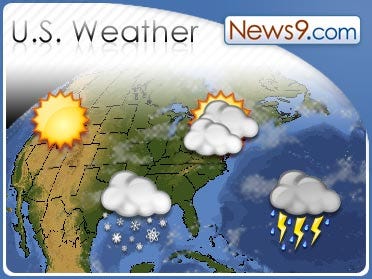 High pressure is keeping the weather dry along the East Coast today
from the New England coast south to Florida. A frontal boundary is extending
from New England south and west into the southern Plains. As a result, showers
are falling from the eastern Great Lakes south into the Ohio River Valley.
Showers and thunderstorms are rumbling from the Tennessee Valley to the
southern Plains. Some of these storms will produce strong to severe
thunderstorms with heavy rainfall likely through southeastern Texas.
Another area of low pressure is spinning through the northern Rockies and is
producing rain showers through the northern High Plains and snow through the
northern Rockies. Some of the snow may be moderate to heavy through the higher
elevations. Blizzard warnings are in effect for northwestern Montana as high
winds and a foot of snow will be likely. Rain and snow showers are falling to
the west to the Pacific Northwest coast.