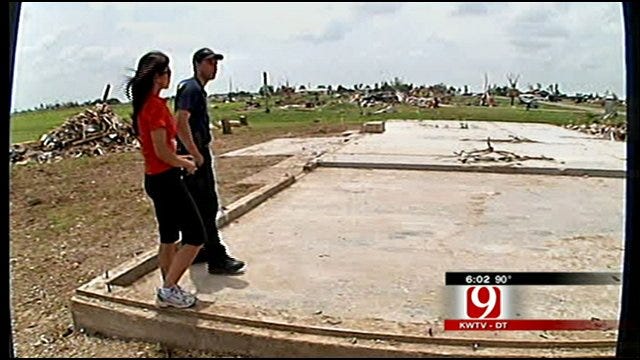 PIEDMONT, Oklahoma -- Over a week ago, a deadly tornado in Piedmont destroyed dozens of homes and vehicles, and those who came to the rescue now need to be rescued.

"I was speechless," said Trevor Wittick, a Piedmont firefighter who has never seen such devastation.  "I seen movies, but this was the real thing and I was in shock when I first saw it.

He just moved in from California less than a year ago and now he is going through the pile of debris that was once his home with fellow firefighters.

"A lot of stuff were scattered a mile away," he said.

Wittick was out saving those who needed help after taking shelter at the fire station that Tuesday night.

"When we first came out there, I didn't even know this was it until we saw the car," he said.

Logan says the storm cellar spared him, his children and his neighbors.

An empty lot and a beat up emergency vehicle are all that remains.  The fire chief plans on rebuilding, but for Trevor Wittick and his fellow firefighters, they have no insurance and now those who work around the clock helping others need the help.

"No one was hurt and things can be replaced and I'm thankful for that," Wittick said.

A donation fund has been set up for the three Piedmont firefighters who lost everything they own.  Donations can be made at any F&M Bank to the Relief Fund for Local Piedmont Firefighters or by calling 405-373-1600.