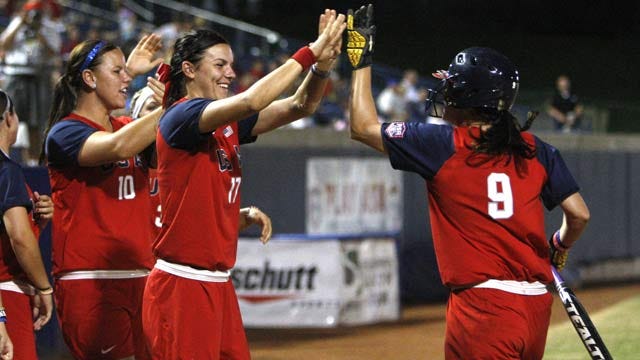 The United States jumped out to an early lead thanks to the Japanese pitching troubles in the first inning. Starter Makiko Fujiwara walked four consecutive batters to bring Rhea Taylor home and score the first run of the game. Brittany Schutte hit a sacrifice fly in the next at bat to give the US a 2-0 lead, without coming up with a hit.

Valerie Arioto, who drew the walk that scored Schutte, recorded her second RBI of the game in the bottom of the third, a single down the right field like to give the US team a three-run advantage.

Japan's first run of the game came in the top of the fifth, on a ground out by Rie Nagayoshi that allowed Yu Yamamoto to score from third to cut the deficit to 3-1. However, the US answered thanks to a Megan Langenfeld single to left.

The Japanese team would score again in the top of the sixth, this time an unearned run Eri Yamada to bring the deficit back to 4-2, but Taylor Hoagland knocked a two-run home run over the left center wall to give the US a four-run advantage heading into the final inning.

Oklahoma ace Keilani Ricketts came in to try to earn the save, and gave up two unearned runs. However, she managed to get Misa Okubo to pop out to end the inning and the game.