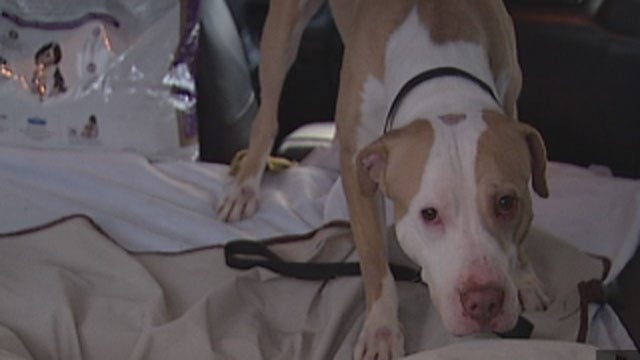 We have great news to report about a pit bull that was involved in a notoriously cruel domestic violence case in Edmond last Fall.

"Butter" is a pit bull police say whose owner Chris Birchmier used as a weapon against his estranged girlfriend last November.

Birchmier still sits in an Oklahoma County jail cell on $100,000 bond. But Birchmier Monday gave up rights to "Butter," who's spent the last three months in Edmond's Animal Control Shelter.

Rod Goodhue of Blanchard's Pit Bull Rescue took possession of "Butter" Monday afternoon. Goodhue says he will work with "Butter" for the next several months to rehabilitate the dog.

"Right now he's got a lot of stress issues, but not anger at all. He's just a really sweet dog," said Goodhue. "He's had more people pulling for him than anybody, a lot of people, including the Edmond Shelter, police and the D.A.'s office should be given credit for saving this dog."