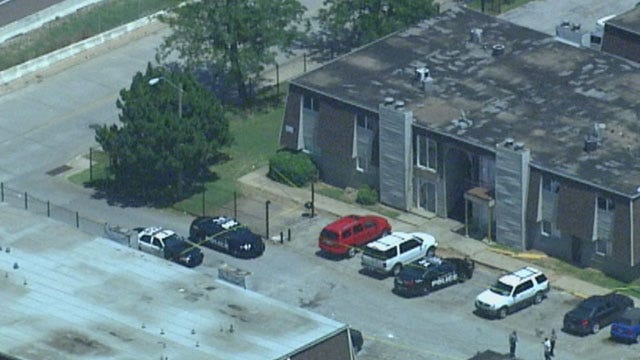 Police are working to piece together a deadly shooting in the metro.

One person was killed at a metro apartment complex Thursday afternoon, and a second shooting victim is still in the hospital.

Police were called out to two separate locations this afternoon when shots were fired. Officers found one man dead at an apartment, and another man who'd been shot was found miles away.

He's here now at OU Medical Center as investigators try to find out whether this all happened at the same crime scene.

Officers arrived shortly after 2 p.m. and one victim was pronounced dead at the scene.

"He shouldn't have been over here. He has a family. My daughter's his fiancé. They just had a baby," Rasheela Harper said.

Residents watched from their apartments as paramedics took another man to the hospital.

"A very short time after that in southeast Oklahoma City, we received a separate call of a possible shooting victim there as well," Sgt. Jennifer Wardlow said.

After talking with witnesses, investigators believe, at this point, that both shootings happened here at the Wentwood at Grand Hill Apartments. That's where a distraught mother arrived to find her son had been shot and killed.

"That's my child that got killed today. That's not right," Donnetta Ventures said.

Tonight police aren't releasing the victims' names, and investigators are still trying to determine a motive in the shootings. We're told the man hospitalized at OU Medical Center remains in serious condition.