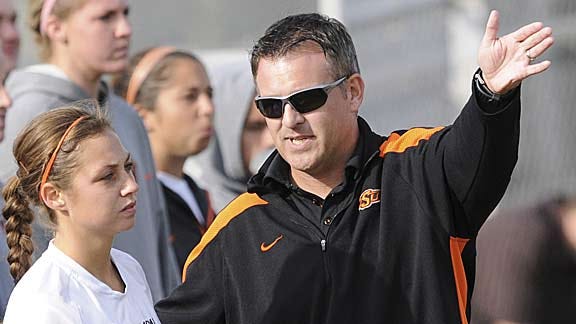 Madison Mercado scored with just over five minutes remaining to give Oklahoma State a 1-0 win over UT Martin in the 2013 season opener Friday night at Skyhawk Field.

OSU finished with an 18-7 advantage in shots in a match that saw the two teams combine for 37 fouls, and Rosa Medina recorded her first shutout since 2011 with a pair of saves.

"Any time you go on the road and play a good team, you take any win you can get," said OSU head coach Colin Carmichael. "We knew it was going to be very difficult, and the first half was pretty even. We made a little adjustment tactically in the second half – we went to a three forward look – and that helped us a lot keeping pressure on their back line and creating a lot more chances."

The Cowgirls dominated the second half of play, outshooting UTM 14-2 after intermission. Courtney Dike led the attack, recording seven shots with three on goal, but OSU wasn't able to break through for a score until the 5:28 mark when Mercado took a pass from Krissi Killion, dribbled by a defender and sent a shot into the back of the net from eight-yards out.

"We called (Mercado) out at halftime a little bit and said she needed to be more dangerous in the attack," Carmichael said. "We felt like she wasn't playing with the confidence that she should. We told all our kids we needed to be more dangerous one-v.-one and look to beat people. Credit to Maddie, she did it four or five times in the second half, and it paid off with a brilliant goal."

OSU returns to action Sunday at Vanderbilt. Kickoff is set for 1 p.m.