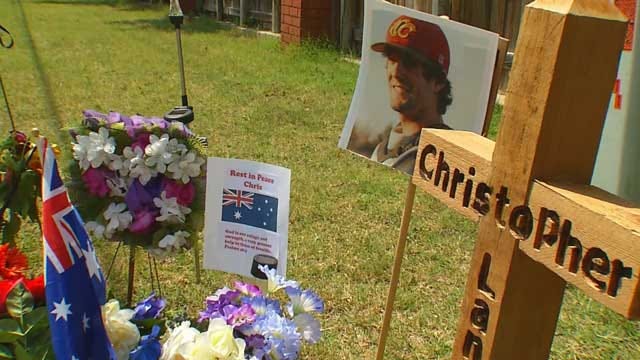 The support for the family of a murdered Oklahoma college student is growing by the day.

The 22-year-old Christopher Lane was shot a week ago in Duncan. Saturday afternoon, his friends gathered for a memorial service in the Metro.

A small crowd of about 30 of Lane's friends came to Oklahoma Christian University's Scott Chapel in Edmond to remember the Australian-born athlete's life. The service was an intimate gathering of friends from Lane's former school Redlands Community College and from members of the O.C. community.

"It was pretty sad, but it was a really great memorial that they put on," said Paige Bailey, a friend of Lane's girlfriend Sarah Harper.

"A guy stood up and talked about Chris and his relationship with Sarah and just how fun and loving he is."

Harper is a student at OC, who is currently in Australia with Lane's family.

Bailey says the service was short and filled with reflections and slideshows of Lane and prayer. It was a similar scene at the vigil held Friday night in Duncan where Lane, a baseball star at East Central University, was gunned down during a jog.

"We focus on remembering Christopher for the things we found out about his talent and him being a compassionate individual with a world of opportunities before him, whose life ended too soon," said Gene Brown, Mayor Of Duncan.

Donations are being collected for Lane's family on the website, www.GoFundme.com under "Christopher Lane Fund."