Oklahoma Football: Plenty of Motivation For Oklahoma Against Baylor 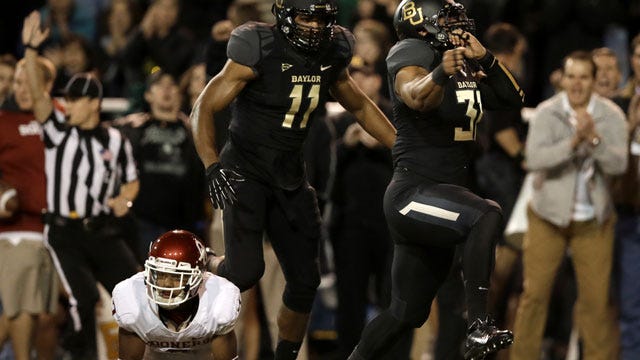 Bryce Petty is ready for Oklahoma, but are the Sooners ready for Baylor?

Oklahoma sure wasn't a year ago. The Sooners may have thought they were ready, but they left Waco black and blue, courtesy of a blacked-out team and crowd in Waco that brought tremendous energy and played with an attitude the Sooners simply didn't match.

It's hard for a team like Oklahoma to match the sort of energy a perennial doormat like Baylor can generate when one of college football's greatest programs comes to town. Especially when the little guy is undoubtedly the better team like the Bears were a year ago.

Saturday, Oklahoma has plenty of motivation when the Bears come to town. The 41-12 pasting the Bears put on Oklahoma last year still lingers in the minds of those who experienced it.

“Obviously we remember the loss last year,” linebacker Jordan Evans said. “Because we're OU and we were coming to their place, they wanted to make a statement against us.

“They came out and just beat us in all aspects of the game. This year we just have to make sure we work on things individually and as a defense. We need to keep their playmakers down to minimum, keep their quarterback contained and then offensively run the ball effectively and impose our will on them.”

Players called the loss to the Bears ‘embarrassing' this week, not because Oklahoma shouldn't be losing to Baylor (although some people's archaic thinking remains this way), but because of the way the Sooners lost. 12 points, 237 yards, one touchdown in three red zone trips, the two misses coming inside the five-yard line. It was a train wreck.

Revenge can't be a motivation for college football players. Gaining motivation from an emotion is never a good thing and it's something that cannot last on a week-to-week basis. The Sooners collectively have said revenge is not a motivator for Saturday's game, but they still haven't forgotten last year. That's a big motivator this week.

“Anytime you lose a game to a team the year before it's a bit of extra motivation,” Wilson said. “We still had a bad taste in our mouths from when we lost to Texas last year. So we still have a bad taste from Baylor and we're going to go out there and play on Saturday.”

The Bears have plenty of motivation as well. Even though they have won two of three against the Sooners, they've never won in Norman. For a team that's still trying to establish itself as a program that's here to stay, that's a big hurdle to jump.

But Oklahoma is trying to close this season like it closed last year. A year ago, the loss to Baylor kick-started a strong finish for the Sooners after the national championship dreams went by the wayside. Saturday's win against Iowa State was a good first step, but a win over a very good Baylor team would be huge.

“Yeah you always have to go in with a chip on our shoulder,” Wilson said. “Really, everyone is counting us out so we can go into this game with nothing to lose and everything to win. Really we just have to go out there and do our job. At the end of the day it's going to come down to us out-executing them.”

Few things show the shifting landscape of college football more perfectly than the way the series between Baylor and Oklahoma has shifted. No longer is Baylor a doormat and no longer is Oklahoma head and shoulders (and torso) above the competition. But Saturday, the Sooners will be looking to return things to how they used to be: with Oklahoma on top.

Oklahoma Football: Plenty of Motivation For Oklahoma Against Baylor