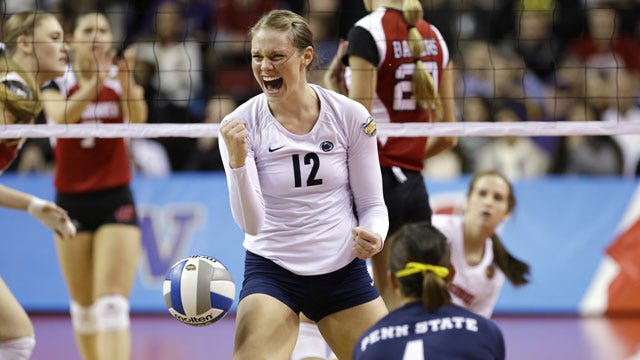 You couldn't script a better ending to a storied career.

For Penn State setter Micha Hancock, this weekend's NCAA Volleyball Final Four is the perfect place to end her career as a Nittany Lion. It's a chance to win a second straight national championship and another Most Outstanding Player award. But for Hancock, the Final Four is about more than just on-court accolades — it's a homecoming.

Hancock was born in McAlester, Oklahoma, and moved to Edmond before middle school to be closer to the elite volleyball clubs. She attended Edmond Memorial before finding volleyball fame at Penn State.

And now she's come home to finish her career.

“When I found out it was here, I was like, ‘No way,'” Hancock said. “It's my senior year and (I'd like) nothing more to get back here and have a chance to compete for the championship.”

Hancock has found success at every level of volleyball, but none of it would have been possible without the influence of one special coach with whom she still has a close relationship.

University of Central Oklahoma volleyball coach Edgar Miraku looked around at the various memorabilia scattered around his office.

One item in particular stands out.

It's a piece of the floor from last year's Final Four in Seattle, which Hancock gave to him with a personal note written on the plastic surface.

“Micha makes it special because of who she's become on the national stage of volleyball,” Miraku says.

Hancock might be arguably the best player in college volleyball today, but she hasn't forgotten her roots or the person who taught her so much about the game—and about life.

Miraku met Hancock when she would tag along with her older sister at volleyball practices at Edmond Memorial — where he was head coach for seven years before taking the UCO job in 2012. Hancock's sister, Kelsey, played for Miraku and went on to star at Tulsa.

“Micha would come to our practices, look around and beg me to play a little bit here and a little bit there,” Miraku recalled. “Micha was young, (but) you could tell the signs were there. Micha had been playing up with older teams up to that point.

“There was no question she was going to be a good player. The question was how good.”

The duo was together for six seasons — four at Memorial and two on the club circuit. In addition to his duties at the high school, Miraku co-founded Oklahoma Peak Performance — widely regarded as the best club in the state — and coached Micha in the 16- and 18-year-old groups.

At Memorial, Hancock started as a freshman — but Miraku said that wasn't what was special.

“She just did everything a little better than someone else her age.”

Hancock showed early on that she was a special player, but refining that talent wasn't always an easy process. Developing into an elite player and eliminating bad habits took work — and a coach willing to push her.

Miraku knew it was important for him to not let Hancock become comfortable with her talent level if she was going to reach her potential.

“As a coach, I always a theory that it doesn't matter who is where or at what level; the goal is to push everyone's level higher,” he said.

Hancock might have been the best player on the team, but that didn't mean she was above Miraku's coaching. In fact, her natural ability made it even more important that her coach consistently challenge her.

“That would have been short-changing Micha; if I didn't push her, she wouldn't get better,” Miraku said. “Her further opportunities would be very limited there.”

Those challenges came daily. Miraku pushed her to become a better player, a better teammate, a better leader

“I used to be the meanest little girl,” Hancock said. “I would just pout on the floor and I've really grown up from that and he (Miraku) showed me how to do that. He sat me down and was like, ‘You need to let people feel like they can play with you and make people around you better.'”

And as Hancock began to understand that making her teammates better was the best way to make herself better, her leadership blossomed.

“That's what sets her apart on the court,” Miraku said. “She knows she can generate points on her own but where she's smart about it is getting others involved, because she's not going to score 25 points. The ability to know how to involve your teammates — what to say and when to say it — it's what completes her as a player.”

Hancock said she's especially grateful for the way Miraku challenged her because not every coach did that for her. At times, she said, coaches would let her do whatever she wanted, which did nothing to help her grow.

“I wanted to get better in the gym,” she said. “Otherwise, I feel like I'm wasting my time.

“Having Edgar as a coach and showing what he showed me was something I looked for after high school and that's kind of what I found here (at Penn State).”

Although she's more than 1,000 miles away from Edmond, Hancock has made sure to stay in touch with her former coach.

Miraku says there hasn't been a single time when Hancock was in town when she didn't stop by his office or go out to lunch with him.

“First thing she tells me after they win the match on Saturday night is she texts and asks if we need tickets (to the Final Four),” he said. “Now that I think of it, I didn't even think about it because I expect that from her. That's the kind of relationship we have.”

Their bond is important to both of them.

“I see him as like a second dad,” Hancock said. “He really matured my game at a young age and pushed me to be my best.”

In Oklahoma's volleyball landscape, it's remarkable that a girl from McAlester would end up leading Penn State to a championship and winning all sorts of national awards. Fame has changed many a college athlete, but not Hancock.

“It's a lot easier for athletes nowadays to lose track of things but she's very much humble, family-oriented and she cares,” Miraku said. “She's shown that in more than one way and just keeping in touch and asking me questions every now and then.

“She doesn't have to do that but it just speaks to her personality.”

He said nothing Hancock has achieved is a surprise. As she tries to lead Penn State to a second consecutive national championship, she'll rely on lessons she learned from Miraku, her former coach who has become more friend than coach.

“He did a lot for me,” Hancock said. “He was patient and he pushed me to be a really good player. I couldn't be more grateful.”