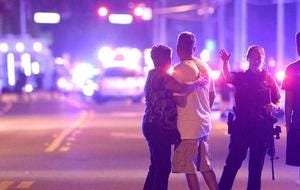 Mixed amid the chaos and confusion in the Orlando shootings were stories of heroism and heart. Instincts kicked in for some people who escaped the gunfire. They risked their safety to help save the lives of others.

The shooting and hostage situation early Sunday morning at Pulse, which describes itself as "Orlando's hottest gay bar," left at least 50 people dead, including the gunman, Omar Mateen, and more than 50 injured, officials said.

When these all-too-frequent mass shootings now happen, we talk a lot about the hate that must have inspired them, reports "CBS Evening News" anchor and managing editor Scott Pelley. But we also want to talk about the courage and survival that our fellow Americans demonstrate in the worst of circumstances.

"It just seemed like it wasn't ever gonna stop,"witness Shawn Royster said.

Royster was with friends on the back patio of the Pulse Nightclub when the shooting began.

"What were you seeing and hearing in that moment?" Pelley asked him.

"Screaming, yelling. They were like dragging bodies. People that were wounded, just to get them out of the way. Sorry, sorry," Royster said, wiping away tears. "Yeah, probably the worst fear I've ever felt in my entire life, so ... I don't know. There just shouldn't be that type of hate."

But in the face of that hate came acts of heroism.

Josh McGill and friend Ashley Summers fled the club and lost track of one another. McGill found shelter behind a car.

"I was about to run for it, to the safe zone," McGill said. "And I hear someone kind of like mumbling, 'Help! Help!'"

A few feet away, 27-year-old Rodney Sumter Jr. lay wounded and bleeding, shot in each arm and once in the back.

"I only saw the one bullet at first, and I was like, 'We need to stop the bleeding.' And he's like, 'Okay.' So I took my shirt off and I tied it around as tight as I could and then I saw his other arm had been shot. So I took his shirt off, tied it around that one," McGill recounted.

The two hobbled their way to police at the scene.

"So the police officer turned to me and said, 'Okay, this is what the deal is. You're going to lay down in the back of that cop car and he's going to lay on top of you, and I want you to bear hug him and try to keep all the pressure on him as you can.' So I did," McGill said. "And they were like 'Also, like keep him conscious.'"

McGill held Sumter all the way to the hospital.