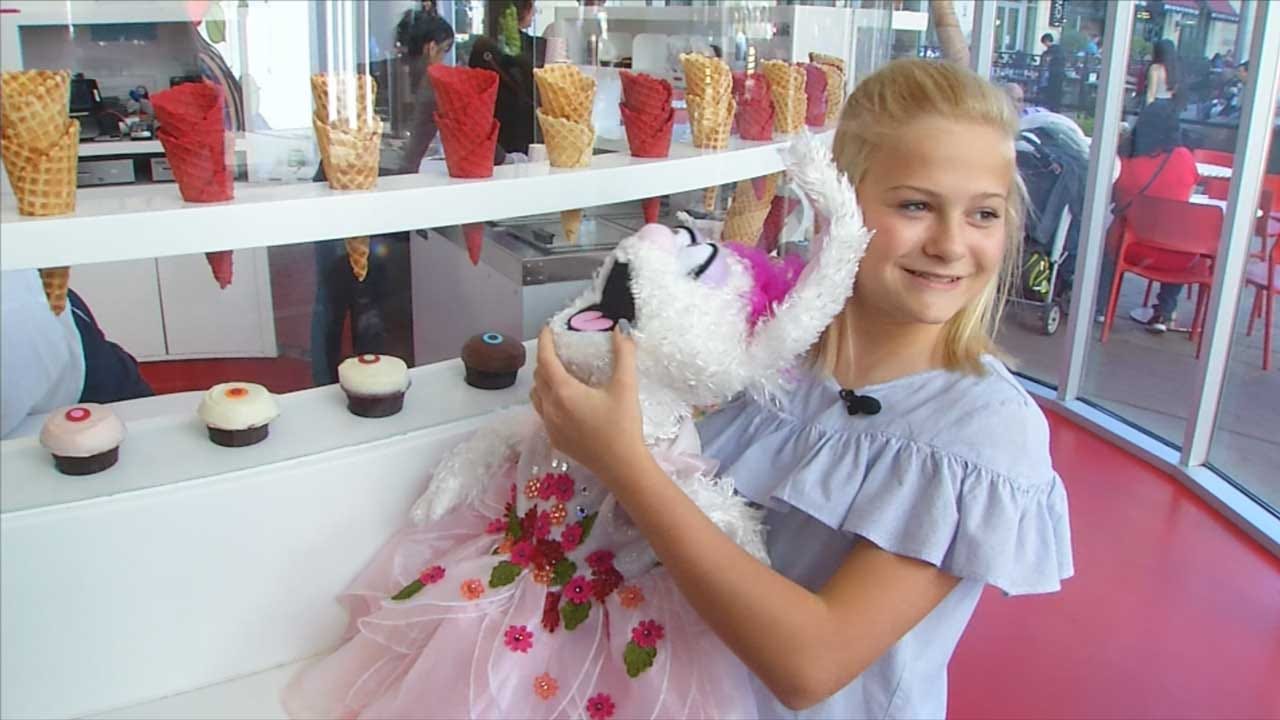 It's not every day a 13-year-old from Oklahoma gets to headline their own show in Las Vegas. But that's exactly what just happened to Oklahoma's own Darci Lynne.

I flew to Vegas and got to spend the whole afternoon with her as she got ready for her big show and to see how she went from winning an Edmond talent show to winning a million bucks.

In a town known for its nightlife, Las Vegas is one of the great meccas for entertainment. And one young Oklahoma City girl is among the very few whom people are lining up to see.

"I love her," added Jadyn Patton. "She's just so unique and sincere.

Superstar ventriloquist Darci Lynne says thanks to winning America's Got Talent, she gets to headline her own Las Vegas show. With stage presence better than most adults, it's easy to forget she just turned 13, until you get her into a toy store.

"My name is Darci, and my ears are moving," Darci joked while wearing bunny ears inside one of the stores at the famed Link promenade.

We got the rare opportunity to hang out before her Vegas show as she goofed around with Dalton, one of her three brothers and her mom. It's evident; she wants to be a normal kid. She still goes to public school in the metro. She loves having sleepovers with her friends. But as we left, it was clear her life has changed.

"People are taking pictures outside of the window," she said. "This is so embarrassing."

Then add a puppet to the mix and there's no escaping attention.

"Can I get a red velvet with chocolate icing sprinkles, hot fudge and caramel sauce," Darci's puppet Petunia said inside the candy shop.

"What's it like to be suddenly famous?" I asked her.

"Well I don't see myself as famous," Darci said. "I try not to direct attention to myself at all. I do not like the attention. That's the only thing I don't like about this change. I guess I don't like the crowd around me. When I'm on stage it's great because they're down there and I know they're enjoying it."

And the fact she's headlining her own show is still unbelievable.

"When I got here and was in the theater and I was like 'oh my gosh, this is really happening. I really have my own show,'" she said. "It's crazy. I literally cannot believe it."

Her family is still trying to adjust to the sudden fame as well.

"It's really quite odd," said Misty Farmer, Darci's mom. "My husband and I walk through the casino and see her face all over the billboards and signs and we're like 'that's Darci's face, our daughter's face."

She's getting the star treatment, limo service around town and hair and makeup before her big show at Planet Hollywood. Not to mention, she won a million bucks. She plans on giving some to her church and taking her family on a trip to Hawaii come spring.  And she's bought one thing for herself so far, a new phone.

Darci's actually been to Las Vegas before when she was just 8-years-old. She was in pageant when another contestant performed ventriloquism and it sparked her interest.

"It took my parents a while to let me do this," she said. "The first time I asked for a puppet she was like 'no.' She was like 'you're a singer, you're not a ventriloquist. You already have three brothers, there's too much on your plate.' But my dad was like, 'let's just get her a puppet for her tenth birthday.'"

For a few weeks, she taught herself ventriloquism and she entered an Edmond talent show. She won.

"She had a certain sparkle about her and the best way I can explain it, I tell people she has this Ronnie Howard, Shirley Temple magic about her," said Gary Owen.

Owen is a local professional ventriloquist and someone at this church showed him Darci's act. That's when he decided to donate lessons to her.

"I had no idea where it would go at all," he remembers. "For about six months, I just basically worked on the fundamentals. And so as time progressed, she got better and better and better."

More than 200 hours of ventriloquism lessons and three years later, Darci would hit it big.

"I can only say it this way, it was God's meant to be," Owen said. "It's so rewarding to sit back and watch this happen to this little child who doesn't have an ego. She's a five star student in school. She has a compassionate heart; she has a beautiful personality and smile. It doesn't get any better than that."

"I'm just glad to be an Oklahoma girl because I really like the state of Oklahoma and I don't plan on moving any time soon out of the awesome state," Darci said. "But I just love living there and making them proud."

Now Darci's Vegas shows are over for now but she'll be doing a homecoming show in OKC on December 16 at The Criterion. The first show sold out quick and the matinee only has a few single tickets available at last check.