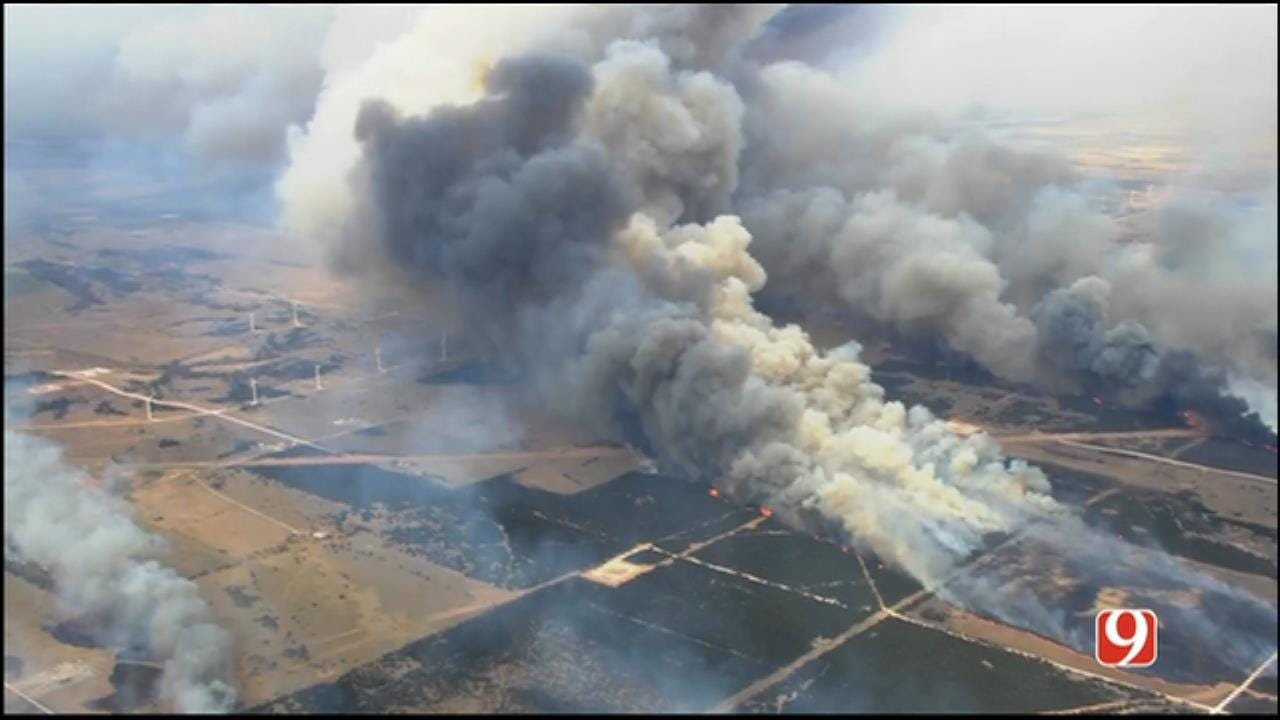 Extremely dangerous conditions continue to fuel historic wildfires in the western half of Oklahoma.

The National Weather Service issued an evacuation order for an area near the towns of Seiling and Oakwood, in Dewey County. At least four tanker aircraft have been deployed to conduct water drops on the fires.

An air evacuation was called to the wildfire eight miles west of Laverne reportedly due to a burned firefighter, the Laverne Fire Chief tells News 9. No other details have been released at this time. Two Butler firefighters managed to escape after their fire truck was overrun by flames.

News 9 is told a Custer City firefighter also suffered some non-life-threatening injuries while fighting the fires.

READ ALSO: How You Can Help People Affected By Oklahoma Wildfires

Authorities tell News 9 efforts are being made to save homes, however, according to scanner reports, some homes have already been engulfed by the blaze. The fires remain 0 percent contained.

The Red Cross is establishing an evacuation center at the First United Methodist Church in Moreland, Oklahoma, located at 302 S. Elm Street.

The Oklahoma Department of Emergency Management released the most recent situation update regarding the fires.

The National Weather Service has issued a Red Flag Fire Warning for much of western Oklahoma through midnight. Temperatures in the 90s will combine with very strong south winds gusting to 50 miles per hour and extremely low relative humidity values of 5% to create explosive wildfire growth potential. A cold front will move slowly south across the state late tonight into Wednesday morning. Temperatures will cool, although strong north winds gusting to 40 miles per hour are expected.

A State of Emergency remains in effect for 52 Oklahoma counties due to ongoing wildfires and critical fire weather conditions that began Thursday. Under the Executive Order, state agencies can make emergency purchases and acquisitions needed to expedite the delivery of resources to local jurisdictions. The declaration also marks a first step toward seeking federal assistance should it be necessary.

Outdoor burning and other activities that could spark a fire are strongly discouraged. Do not throw cigarettes out car windows. Report any suspicious smoke or fires to your local law enforcement or fire authority.

Oklahoma Department of Emergency Management is working with Dewey and Woodward County emergency management departments to provide a survey for residents to submit damage information caused by the Rhea Fire and 34 Complex Fire. Residents impacted by the Rhea Fire and 34 Complex Fire can report damages to their property by calling 211 or using the following link http://arcg.is/uK0Te. Reporting damage helps local and state emergency managers better coordinate response and recovery efforts.

Two independent shelters are now open for residents displaced by the Rhea fire:

American Red Cross and Oklahoma Baptist Disaster Relief continue to provide meals to firefighters and residents impacted by the Rhea and 34 Complex fires.

American Red Cross is also providing food and beverages to responders at a fire west of Laverne in Beaver County.

Oklahoma Office of the Chief Medical Examiner reports a 61-year-old man died Thursday in Roger MIlls County as a result of injuries sustained in the fire that began southeast of Leedey.

Dewey County Sheriff reports a woman died in her vehicle at a residence near Seiling as a result of the Rhea Fire.

According to the Oklahoma State Department of Health, nine injuries have been reported by area hospitals:

Rhea Fire – Evacuations were ordered today for residents in and around Oakwood and areas near Seiling. Oklahoma Forestry Services is providing three heavy air tankers to assist with the fire. Oklahoma City Emergency Management is deploying a four-member Emergency Operations Center Team to provide support. This fire is estimated at 248,589 acres.

Additional fires have been reported in Pushmataha and Texas counties.

More than 300,000 acres have burned so far. Payne County Agricultural Educator Nathan Anderson said OSU is working with many other Coops around the state, and with Emergency Management to get hay, feed, and other much needed assets to that part of the state.