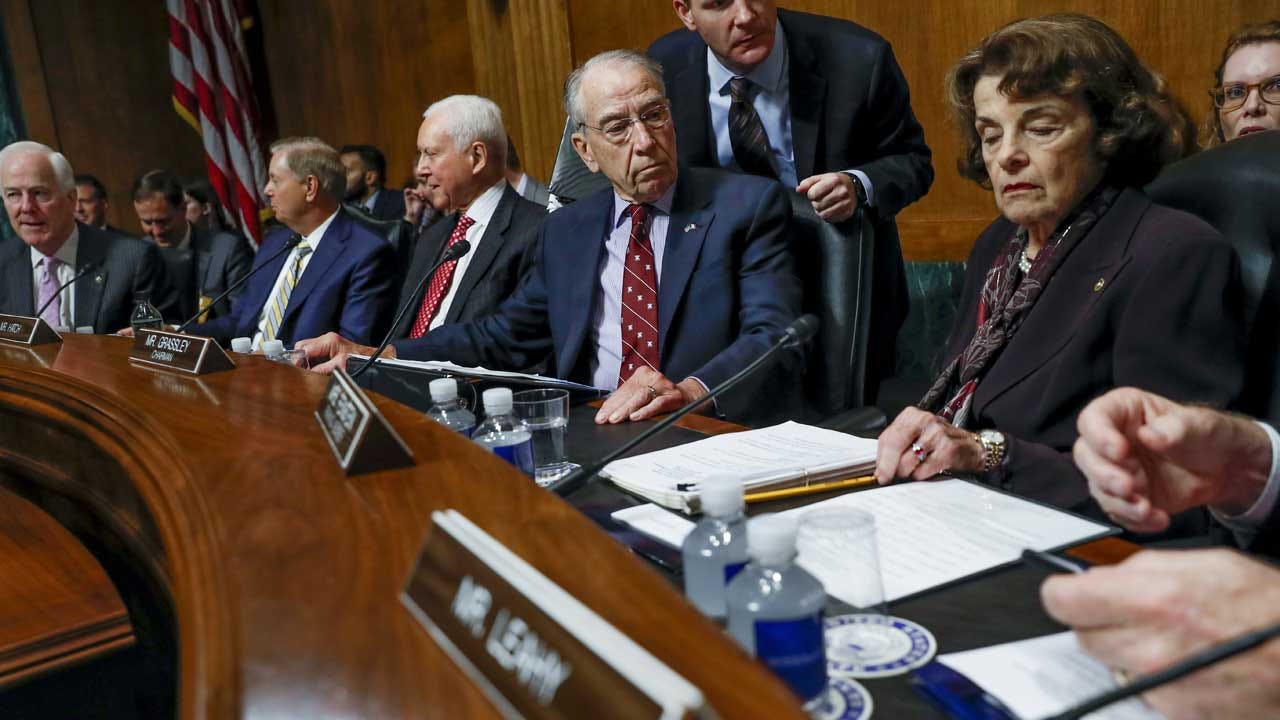 In a surprise development, Arizona Sen. Jeff Flake, a Republican, is pressing the Senate to delay Brett Kavanaugh's confirmation to be a Supreme Court justice. Friday morning, it seemed likely that Kavanaugh would proceed on a party-line vote to a procedural vote by the full Senate Saturday, with final confirmation likely on Tuesday.

But Flake, who had hours before announced he would support Kavanaugh's nomination, then said during the Judiciary Committee proceedings that he would support advancing the nomination to the full Senate for consideration, but would not cast a vote on a motion to proceed with the final confirmation unless there was a week-long pause to allow the FBI to investigate some of the sexual assault allegations against Kavanaugh.

Soon after the party-line vote to advance Kavanaugh's nomination to the Senate, two undecided senators said they support Flake's proposal -- Sen. Joe Manchin, D-West Virginia, and Sen. Lisa Murkowski, R-Alaska. The support of these senators, along with that of all the Senate Democrats, is enough to halt Kavanaugh's nomination, likely forcing Senate Majority Leader Mitch McConnell to ask President Trump to request that the FBI open an investigation into the Kavanaugh allegations.

Before the 1:30 p.m. vote, Flake left the Senate Judiciary Committee room for a lengthy meeting with Democrats on the committee, who had stalked out of the room in protest over the refusal of Republicans to ask for an FBI investigation, a day after Ford's powerful testimony about her alleged encounter with the Supreme Court nominee decades ago moved most senators, as well as the president, to deem her "credible."

Ford said she was "100 percent sure" Kavanaugh assaulted her, and Kavanaugh insisted he is completely innocent.

Flake said that he believed it would be proper to delay the floor vote to allow the FBI to conduct an investigation "limited in time" to no more than one week.

The committee voted to continue to a floor vote in the Senate, which fell along party lines, 11-10.

Republican Sen. Lindsey Graham pointed out, however, that the burden of delaying a vote would be on Senate Majority Leader Mitch McConnell and Senate Minority Leader Chuck Schumer.

"This country is being ripped apart here, and we've got to make sure we do due diligence," Flake said. He added that he would be more "comfortable" with an FBI investigation.

Republican Sen. Lindsey Graham, who has been a staunch supporter of Kavanaugh, seemed resigned to Flake's decision.

"Last time I checked, you need fifty votes," Graham said about Jeff Flake's proposal. "And somebody's got to explain this to Trump, and that'll be my job!"

CBS News' Ed O'Keefe reported that a senator had texted him that "something is up" with Flake.

The meeting is being delayed as senators, including Flake and all Democrats, continue to huddle in an anteroom outside of the hearing room.

THE (BACK)ROOM WHERE IT HAPPENS: Senator on the Judiciary Committee in the back room with colleagues responds to a text saying “yes,” something is up with Flake.

When does the Senate Judiciary Committee vote?

The committee is set to vote at 1:30 p.m., after senators made lengthy speeches describing why are are supporting or opposing Kavanaugh.

On Friday morning, protesters were kept down the hall and around the corner from the hearing room, but they can be heard chanting, "November is Coming!" and blowing whistles. Some have been arrested by Capitol police.

Before the vote, Sen. Richard Blumenthal, D-Connecticut, motioned that Kavanaugh's friend, Mark Judge, should be subpoenaed as a witness to appear before the committee. Judge was alleged by Ford to have been in the room during her assault. Blumenthal acknowledged that Judge had sent a "cursory six-sentence" letter with a statement denying any recollection of the incident. The motion was defeated on a party-line vote.

Senate Judiciary Chairman Chuck Grassley, R-Iowa, moved to hold the vote on Kavanaugh at 1:30 p.m., a motion which passed the committee on a party-line vote 11-8. Democratic Sens. Cory Booker and Kamala Harris, both visibly angry, declined to vote in protest. Several Democrats walked out of the committee room in protest -- Booker and Harris, as well as Sens. Richard Blumenthal of Connecticut, Sheldon Whitehouse of Rhode Island, and Mazie Hirono of Hawaii. They talked to reporters outside the hearing room and accused the majority of ramming through Kavanaugh's nomination, and they continued to insist that the FBI investigate the allegations against Kavanaugh.

It's not clear yet, CBS News' Ed O'Keefe notes, whether the senators will be back in their seats at 1:30 p.m. for the committee's vote on Kavanaugh.

Inside the hearing room, senators also continued to talk about the allegations against Kavanaugh, including that of Deborah Ramirez, a client of lawyer Michael Avenatti. Grassley said that his committee has asked other accusers for evidence of their claims but has not received any.

Most Republicans on the committee are standing by Kavanaugh and want to proceed with his confirmation, while Democrats want the process slowed and are calling for an FBI investigation into the allegations against Kavanaugh.

The 21 senators on the committee -- 11 Republicans and 10 Democrats -- are likely to vote along party lines to advance him. Sen. Jeff Flake, who was among a handful of senators who have not yet said how they'll vote, announced in a statement Friday just before the committee vote that he would support Kavanaugh's confirmation. His support likely ensures that Kavanaugh's nomination will pass out of the committee with a one-vote majority.

The committee is also considering the nominations of eight other judges in its meeting Friday.

With a 51-49 split in the GOP-controlled Senate, the margin is slim. Senate Majority Leader Mitch McConnell is planning the first procedural votes on Kavanaugh's nomination to take place as early as Saturday morning, with the final vote to take place on Tuesday. If all Democrats vote against confirming him, Republicans can only afford to lose a single vote.

The two Republicans to watch in the final vote are Sens. Lisa Murkowski and Susan Collins, who have not said whether they'll support Kavanaugh.

And there are also three Democrats who voted to confirm President Trump's first Supreme Court nominee, Neil Gorsuch, and none of them has said whether they'll support Kavanaugh: Sens. Joe Manchin of West Virginia, Joe Donnelly of Indiana, and Heidi Heitkamp of North Dakota.